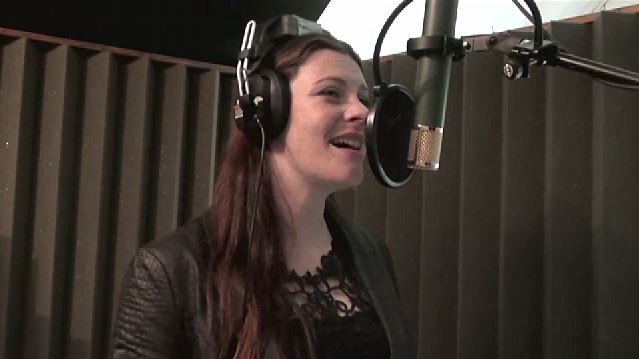 Finnish / Dutch / British symphonic metallers NIGHTWISH have released the seventh in a series of video clips featuring footage from the making of the band's new studio album, due in the spring of 2015 via Nuclear Blast. Check it out below.

Commented keyboard player and main songwriter Tuomas Holopainen: "We are actually ahead of our schedule. Incredibly, Floor [Jansen] has sung about two songs a day. Marco [Hietala] cut the final bass parts in one and a half days and Emppu [Vuorinen] did the rhythm guitars in a week. I think it was because everything was so well-rehearsed this time. We've tried to work more like a band."

Added Jansen: "Tuomas challenged me, using everything I have to offer. High, low, soft, whatever, but definitely lower stuff and very soft and intimate things. Something that more by coincidence was something that I kind of missed doing. Something I haven't explored much and Tuomas wrote parts where I have to use this completely, where I have to go into it entirely. I'm very happy with what came out there."

As previously reported, longtime NIGHTWISH drummer Jukka Nevalainen is sitting out the recording sessions for the group's new CD due to health issues; Kai Hahto (WINTERSUN, SWALLOW THE SUN, TREES OF ETERNITY) has replaced him.

NIGHTWISH recently revealed the famed evolutionary biologist and atheist writer/leader Richard Dawkins will appear as a guest on the band's eighth studio album.

Jansen, who officially joined the band last year, made her live debut as the frontwoman of NIGHTWISH on October 1, 2012 at Showbox Sodo in Seattle, Washington.