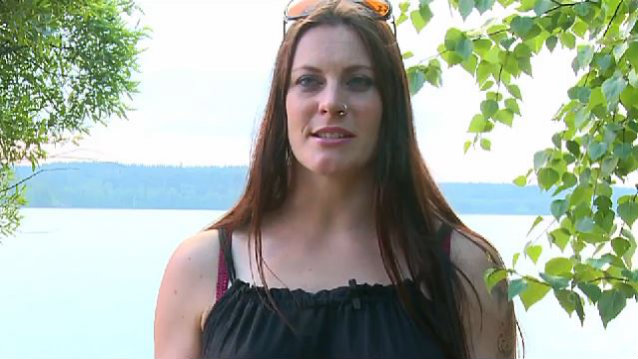 Finnish / Dutch / British symphonic metallers NIGHTWISH have released the fifth in a series of video clips featuring footage from the making of the band's new studio album, due in the spring of 2015 via Nuclear Blast. Check it out below.

As previously reported, longtime NIGHTWISH drummer Jukka Nevalainen is sitting out the recording sessions for the group's new CD due to health issues; Kai Hahto (WINTERSUN, SWALLOW THE SUN, TREES OF ETERNITY) has replaced him.

Asked in an interview with Sweden's Metalshrine what singer Floor Jansen will bring to the next NIGHTWISH album, keyboardist and main composer Tuomas Holopainen> said: "She [will] bring a lot of interpretations, some arrangements and positive energy for sure, but she [will] not [be] included in the songwriting process. She told me that the first time around, she has [her side project] REVAMP and Marco [Hietala, bass/vocals] and I will do just fine for now."

Speaking to Germany's EMP Rock Invasion at the end of last year, Floor stated about the songwriting process for the next NIGHTWISH album: "I think it's more like it's always been. So Tuomas is gonna start writing. And how it's gonna evolve later on, we'll see. But I don't feel the necessity of me being an active songwriting member, because the music is so good. It's about the songs and the music that goes first and not about my ego wanting to join like that. But if I can participate or add something with my creative input, of course I would love that. Of course, I have creative energy in me that needs to come out one way or another, but that's where REVAMP comes in."

Regarding whether she has any fears that, due to the band's troubled history with lead vocalists, her time with NIGHTWISH will not last very long, Floor told Finland's Radio Rock: "No. And whether this is in NIGHTWISH or in anything with anyone in everyone's lives, what guarantees do you have? So it's just about what you make of it and with the chemistry that you believe in. And I believe in the chemistry that we have today, 'cause it's been very strong since the beginning and grew to be better throughout the months. It's still a very recent thing. But what feels good now, that's where you should go from, and that's what I do."

Jansen made her live debut as the frontwoman of NIGHTWISH on October 1, 2012 at Showbox Sodo in Seattle, Washington.