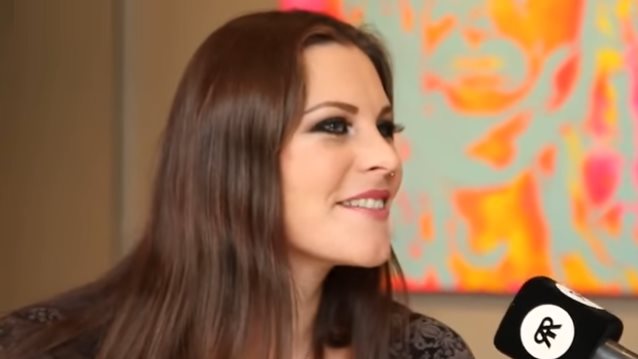 NIGHTWISH singer Floor Jansen, who is expecting a baby early next year with her partner, SABATON drummer Hannes Van Dahl, was asked by Finland's Radio Rock whether it will be difficult for her to calm down and enjoy family life during NIGHTWISH's previously announced year-long break in 2017. She responded (see video below): "I don't know. I don't know how it is to calm down, really, yet. But I do know I will enjoy family life. What I've seen from moms, or heard stories from people who became a parent, it's such a consuming thing, it's such a wonderful thing, I consider it an extreme luxury to have that time and to not have to do anything else, and just be with my kid. Therefore, I think it's wonderful to have that time and to just let it all happen. And the rest, it comes as it comes."

Regarding the challenges of raising a child while being in a touring band like NIGHTWISH, Floor said: ""Well, yeah, of course, it's an important… It's a very challenging combination, and I was very happy that the way we are today — or, actually, have always been — it's a very open group; we can talk about things. And the guys, actually, were curious. A few months ago, we started talking about it, like, 'So, 2017… How about kids? Yeah?' So it's great to think about things together: how can we combine it? Also 'cause my partner is in a successful band, touring a lot. Yeah, then you need the cooperation of the people that you are family with also. So I am not afraid that won't work. It will be a challenge, for sure, but, yeah, a little SABATON or NIGHTWISH daycare program sounds lovely, doesn't it? [Laughs]"