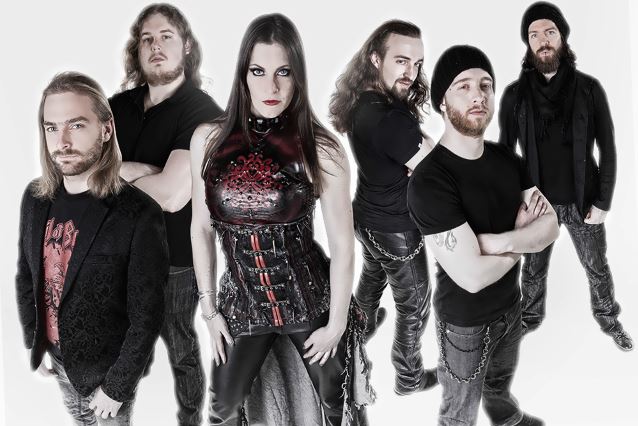 The group says in a statement: "After two great albums, it is unfortunately not possible for the founding front lady Floor Jansen to have a band next to NIGHTWISH. Projects perhaps, but a band deserves a 100% devotion, which is impossible to deliver to two bands at the same time."

Adds Floor: "I am proud of the two albums we made together! REVAMP has such talented and great musicians that I wouldn't want them to wait any longer for me to find the time and the passion it needs to make another album. I also don't want to give fans false hope.

"REVAMP lived a short and bumpy but exciting life, but now it's time for new bands and projects to start. I thank everyone involved for the love and dedication!"

Jansen told About.com Heavy Metal about the songwriting process for "Wild Card": "When AFTER FOREVER stopped, I didn't want to first find a band, then see if I could write with them, figure that whole thing out, then record an album. Instead I worked with people I knew would be good songwriters out of an idea how I thought it would sound like. So I worked with a German guitar player (Waldemar Sorychta) and Joost van den Broek from AFTER FOREVER. We wrote the album and played on it and hired a drummer. That's basically how it was done. Then I formed a band with the current lineup. The ambition was to continue as a band and start writing. The cool thing is that it worked. Mainly the guitarist Jord (Otto), keyboardist Ruben (Wijga) and myself came up with all the ideas. Joost became the supervisor of the whole songwriting process and producer of the album."

Jansen revealed earlier in the month that she is four months pregnant. The singer, whose partner is SABATON drummer Hannes Van Dahl, is expected to welcome her first child next year while NIGHTWISH is off the road for the band's previously announced year-long break.

REVAMP guitarist Jord Otto and bassist Henk Vonk are about to release an album with THE BLACKEST GREY. Jord is also working on an album with MY PROPANE. Meanwhile, REVAMP keyboardist Ruben Wijga is composing and working on different projects.