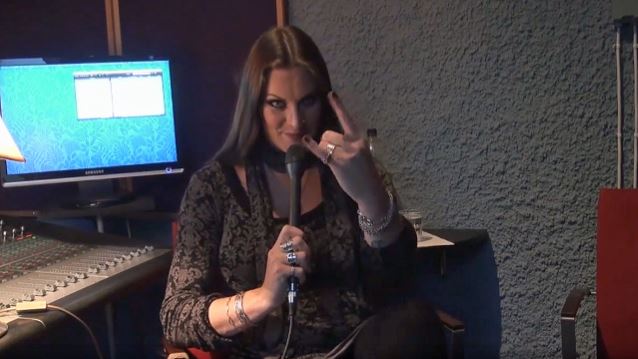 Finland's Kaaos TV recently conducted an interview with NIGHTWISH singer Floor Jansen. You can now watch the chat below.

Asked if she is planning to reactivate her REVAMP project during NIGHTWISH's previously announced year-long break in 2017 following the completion of the touring activities for the group's latest album, 2015's "Endless Forms Most Beautiful", Floor said: "I will have the very special luxury of having time at home with my family… family-to-be. So indeed the first months of next year, I'll be working on being very pregnant [laughs], and hopefully getting a healthy baby. And I really see that as priority number one. Musically, I have little ambition. The only real ambition I have is to make music and do music whenever I feel like it, without any real ambition or planning."

She continued: "REVAMP is a band that would deserve the hundred percent devotion a band needs, and at this moment, I don't see any future for another band next to a band such as NIGHTWISH, and with the ambition to become a mother, I will have to let REVAMP go, which is a very sad decision. That doesn't mean I don't wanna do any music, but only in time that I think is right.

"There is a project that I did back in 2008 with a Norwegian guitar player, Jørn Viggo Lofstad, who plays in PAGAN'S MIND. We wrote a rock album and we never released it. So we're gradually picking that up and seeing if we can do anything with this. But again, family first and the rest comes in time that we have."

NIGHTWISH will play three more shows in Asia this month before completing the world tour in support of "Endless Forms Most Beautiful".

NIGHTWISH will release "Vehicle Of Spirit" on November 4. The DVD will feature the band's performance from the Wembley Arena, along with their show at Tampere, Finland's Ratina Stadion.