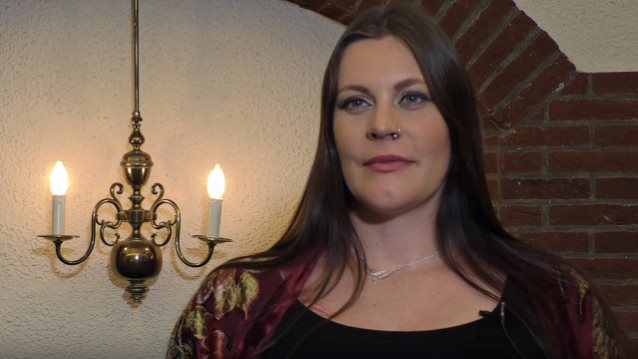 On January 27, Holland's FaceCulture conducted an interview with NIGHTWISH singer Floor Jansen. You can watch the chat in three parts below. A few excerpts follow (transcribed by BLABBERMOUTH.NET).

Floor: "Since the moment I joined with NIGHTWISH, I have been working non-stop. Also having [the side project] REVAMP — now, unfortunately, I had to stop this — but it was because of this… It's a non-stop thing. First there was NIGHTWISH, then there was REVAMP, then there was NIGHTWISH again. It would have just continued like that without any form of a break. Everybody needs to take a little distance from things. Even though the desire to have a break like this came from the members in NIGHTWISH that have been there since the beginning — 'After twenty years, let's take a year off.'… Yeah… At first I was, like, 'Yeah. Okay.' And then I realized, yeah, but there is indeed more to life than NIGHTWISH. Even though NIGHWISH is my life and I love what I do — I could do this every day — to not do it really makes you desire even more for it again. And, yeah, then there is time to give in to other things you find important, such as family life. So when I realized indeed I would have that time, yeah, we went further. [Laughs]"

On whether the other members of NIGHTWISH also needed a break:

Floor: "Yeah, absolutely. Not because it wasn't good, but because it was good. To be able to say, with a calm heart, 'Things are so good, I can put them away for a little while,' that's something really special. That's a luxury that a lot of people will never be able to have. And when we realized we can, why not? Yes, we will have to wait, and we will keep other people waiting, but to come back with an energy that you will never have without a break like this, that's magic. And to indeed say, 'Okay, I've done this for twenty years. Now I'm gonna do something completely different'… wow! It's good for everybody. It's very healthy."

On whether the end of REVAMP means that she will be more involved in the NIGHTWISH creative process of if she has other outlets for her creativity:

Floor: "The thing was the combination of two bands, which comes with all its responsibilities, that became too much. But to not do anything next to NIGHTWISH didn't really mean that 'black and white.' So I would love to be more involved in NIGHTWISH, if I can — if I actually make an addition to the music, which, with a songwriter as Tuomas [Holopainen, keyboards], is almost impossible; that's just a fact, and that's fine. But I have, back in 2008, [written] an album, a rock album that's totally different music, with [Norwegian guitar player] Jørn Viggo Lofstad from PAGAN'S MIND, both of us doing something really out of our comfort zone. We wrote an album that was supposed to be like a side project kind of thing in between [Floor's former band] AFTER FOREVER, but when everything changed, when the band stopped, we put the whole project on hold. So I could imagine working on this again. I contacted him over a year ago, 'Hey, my 2017 is gonna look like this. Would you be up for it again? Check the music, see what we have, and finish this.' So that is something that I would love to do. But most important is to do this, or anything else with music this year, that has no precise deadlines or any expectations yet. Make music when I want to in whatever style I would like to. That is something that I know that I'm not the only NIGHTWISH member who has that. That's a luxury we can take, and we will. Music is also still a hobby and passion, so, yeah, that would be lovely."

NIGHTWISH released a new DVD and Blu-ray, "Vehicle Of Spirit", in December. The effort features not only two full concerts, but also plenty of bonus material.