NICKELBACK's "All The Right Reasons: 15th Anniversary Expanded Edition" will be released as a two-CD set on October 2 and will also be available digitally on all streaming platforms. The collection features a newly remastered version of the original 2005 album, a selection of B-sides and a 2006 live concert recording.

NICKELBACK's third consecutive No. 1 album, "All The Right Reasons" topped the charts in the band's native Canada, the U.S., U.K., Germany, Australia and New Zealand. To date, it has sold more than 19 million copies worldwide and has been certified diamond by the RIAA. The record produced seven singles, including five Top 20 hits: "Photograph", "Savin' Me", "Far Away", "Rockstar" and "If Everyone Cared".

Disc One: All The Right Reasons and Assorted B-Sides Remastered

A remastered acoustic recording of "Photograph" can be streamed below.

Frontman Chad Kroeger told The Pulse Of Radio a while back that he doesn't know the formula for NICKELBACK's success. "I used to think I knew how to help another band achieve success, and I don't think I know how to do that anymore," he said. "I mean, that's what every record company is looking for, aren't they? How do we get a band to be as successful as we possibly can. There's just something there about four guys that get together, make music, and they get onstage and they play their hearts out for their fans... sometimes it works and sometimes it doesn't."

Since forming in Alberta, Canada in 1995, globally celebrated NICKELBACK have cemented themselves as one of the most commercially viable and important acts of the past three decades. NICKELBACK's success includes worldwide sales of more than 50 million units, solidifying their status as one of the top-selling acts of all time.

Their inescapable and irresistible smash "How You Remind Me" was named Billboard's "Top Rock Song Of The Decade" and was No. 4 on the Top 10 songs of the 2000s list. "All The Right Reasons" was diamond certified (10 million+ copies sold) by the RIAA, in 2018, putting them on an elite shortlist of artists to ever accomplish this. Amongst all these accolades, they've also been named Billboard's "Top Rock Group of the Decade." And, along the way, they have received a staggering nine Grammy Award nominations, three American Music Awards, a World Music Award, a People's Choice Award, twelve JUNO Awards, seven MuchMusic Video Awards, and have been inducted into Canada's Walk Of Fame (2007). 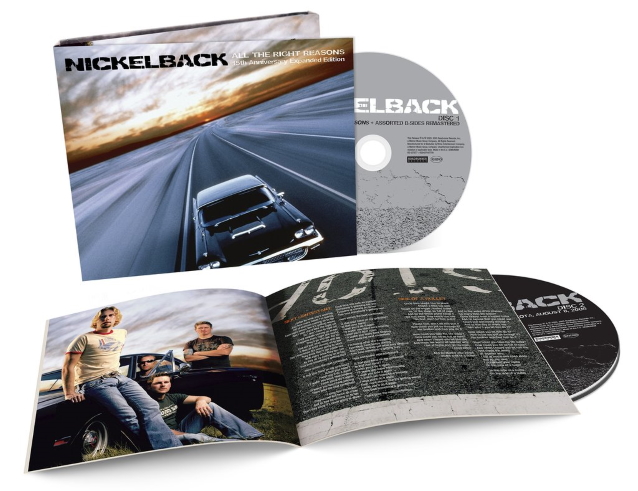