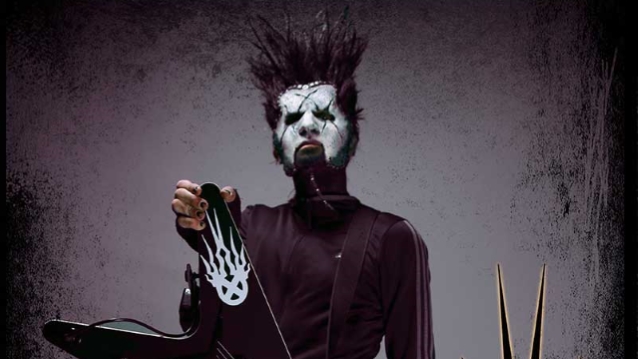 The identity of STATIC-X's touring vocalist has finally been confirmed — thanks to a tattoo.

Ever since STATIC-X's comeback was first announced last year, there were strong rumors that DOPE frontman Edsel Dope was singing for STATIC-X under the name Xer0 while wearing a mask in the likeness of late frontman Wayne Static and performing alongside original bassist Tony Campos, drummer Ken Jay and guitarist Koichi Fukuda.

Up until now, STATIC-X has consistently brushed off speculation about Xer0's identity, explaining that his anonymity "keeps the focus on remembering" Wayne.

Earlier today, Danish magazine Metal A Day posted side-by-side pictures of Dope and Zer0 from the two bands' joint October 7 concert in Hamburg, Germany, with photographer Anders Groos Mikkelsen noticing a "specific similarity" between the neck tattoos sported by the frontmen of the two acts. You can find the photographic evidence below.

Shortly before STATIC-X's 20th-anniversary tour of the platinum-certified "Wisconsin Death Trip" album kicked off in June, Campos told the "Everblack" podcast that finding the "right guy" to front the band was "the big hurdle. But once we figured that out, then we started trying to figure out, 'How do we represent Wayne in a cool way that he would think was cool?'" he explained. "And we started thinking about all those t-shirt designs that we had of skulls with Wayne's hair and beard, and how to bring that to the stage. And I think the mask came out pretty cool, in a cool way to represent Wayne, and I know Wayne would have thought it was cool. And then keeping the singer's identity anonymous also keeps the focus on remembering Wayne and remembering the original lineup of the band and the first record, and it keeps the focus on that instead of having a 'Van Hagar' situation. We didn't wanna present it [as] 'Here's STATIC-X with their new singer.' It's not what this is about and it's not what we're trying to do. So I think the mask, it helps accomplish that."

Jay said about the addition of the new vocalist: "For us, the goal was 100% about recapturing the vibe and the spirit of STATIC-X. We were never interested in using a hologram or using Wayne's pre-recorded vocals. It has to be real and it has to have a soul and a pulse. STATIC-X has always been four guys. Two guitars, bass, drums, and vocals. We didn't want to mess with that formula. This is the most electric version of 'Wisconsin Death Trip' 2.0 that we can imagine, without actually having Wayne here with us."

Fukuda added: "At first, I was actually a little skeptical of how we could do all of this, but after I heard him sing, I was sold. I am so impressed with how far it has come in a short amount of time. I know that Wayne would be very proud of how much heart and effort has been put into this. It is truly an honor."

In a rare interview with Kerrang! magazine, Xer0 said that he needed to reproduce Wayne's vocals and stage presence as faithfully as possible. "Wayne was a very unique singer," he explained. "I can't just be myself with this. That wouldn't be doing the material justice. Therefore, I really have to be prepared. I have to learn lots of parts…find the right places in my own voice to deliver my best version of these songs…I'm never gonna sound as good as Wayne did, doing Wayne's thing. That's just common sense. But I feel really good about it. I believe that I will represent the vibe of the band very well and that we will give the fans a really fun 'Wisconsin Death Trip' experience each night."

Xer0 confirmed that he was the one who came up with the idea of playing masked.

As previously reported, STATIC-X will release a new album titled "Project Regeneration", featuring the last recordings of Wayne Static, on May 29, 2020. The rest of the group's original lineup will also be featured on the album and in the music videos, including the promotional clip for the single "Hollow", which was released yesterday. The teaser, which was directed by Xer0 and co-directed by Matt Zane, also features a snippet of the band's hit song "Push It", re-recorded in 2019 with Xer0.

During the recording sessions for "Project Regeneration", one of STATIC-X's producers uncovered several additional unreleased and unfinished tracks, many of which contained isolated vocal performances by Wayne Static. Because of this incredible find, the new STATIC-X album will now feature lead vocals by Wayne on virtually every song.