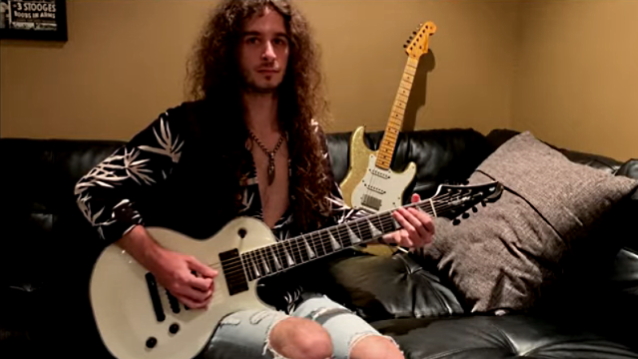 New RATT lead guitarist Jordan Ziff — who is also a member of Marty Friedman's backing band — spoke to The Entertainer! Magazine about what it was like to join the band in 2018 as the replacement for Warren DeMartini.

"I love playing those songs," he said. "When I was in high school, I listened to that stuff. It's interesting to be able to come into a band that had a guitar player I really respect and be in his position to do his stuff.

"I will never play songs 100% note for note," he said. "It's just not what I do. Even if I'm playing a cover song, I want to somehow make it my own song. That's what I do. If I was playing in a band where it was unacceptable for me to be myself, I wouldn't want to be a part of it."

Ziff began playing with Friedman for the former MEGADETH and CACOPHONY guitarist's tour in support of his acclaimed 2014 release, "Inferno".

Jordan recently told "The Official Danko Jones Podcast" that he is finishing up a solo record that he has been "working on for a little while." He explained: "I've been working on it longer than I should have been, but I get busy playing with other people and going and doing gigs and doing the stuff that pays the bills, so I haven't been focused enough on my own stuff. So it's kind of cool I've been able to do that."

Speaking about what fans can expect musically from his debut solo record, Ziff said: "It's gonna be mostly instrumental, with the exception of possibly a few songs that there's singing on. And a couple of covers too, but they're covers that were not originally instrumental, and I turned them into instrumentals."