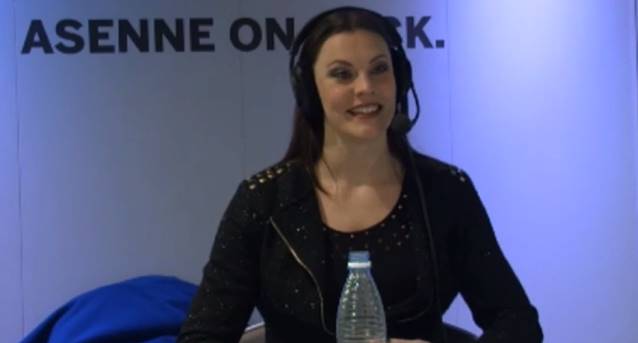 On November 7, Dutch singer Floor Jansen of NIGHTWISH and REVAMP was interviewed in the studios of Finland's Radio Rock when REVAMP played at Nosturi in Helsinki as the support act for KAMELOT. You can now watch a clip from the chat below. Excerpts follow.

On whether she has spoken to her friend, former NIGHTWISH singer Tarja Turunen, about their shared experience of fronting the band and the circumstances that led to Tarja's departure from the group:

Floor: "Not really. No. Because I feel everyone is different. Time and times have been different. People grow, people change. And I don't wanna go down that road. I'd rather see what happens around me and be in the here and the now with the people I work with and don't go behind backs and [say], 'How was it for you? What happened?' You know. I don't do that."

On whether she has any fears that, due to the band's troubled history with lead vocalists, her time with NIGHTWISH will not last very long:

Floor: "No. And whether this is in NIGHTWISH or in anything with anyone in everyone's lives, what guarantees do you have? So it's just about what you make of it and with the chemistry that you believe in. And I believe in the chemistry that we have today, 'cause it's been very strong since the beginning and grew to be better throughout the months. It's still a very recent thing. But what feels good now, that's where you should go from, and that's what I do."

"Showtime, Storytime" contains NIGHTWISH's entire August 3 performance at the Wacken Open Air festival in Wacken, Germany. The show, which was played in the front of 85,000 screaming metalheads, was directed by Ville Lipiäinen, filmed with seventeen cameras and has a total running time of 85 minutes. The second disc consists of a 120-minute tour documentary, "Please Learn The Setlist In 48 Hours", also directed by Ville Lipiäinen, with no shortage of drama or overall madness. Also, there is a 16-minute NIGHTWISH Table Hockey Tournament, filmed on tour. In addition, there are two music clips: "I Want My Tears Back" (live at Hartwall Arena in Helsinki, Finland) and "Ghost Love Score" (live in Buenos Aires).

The Wacken Open Air appearance was the first of the three final shows of NIGHTWISH's "Imaginaerum World Tour", which saw the band and their Jansen playing 104 concerts in 34 different countries, with a total audience of over 1.5 million fans around the globe.

NIGHTWISH keyboardist/mainman Tuomas Holopainen has known Jansen for more than 10 years already, having previously toured with her former band, AFTER FOREVER.