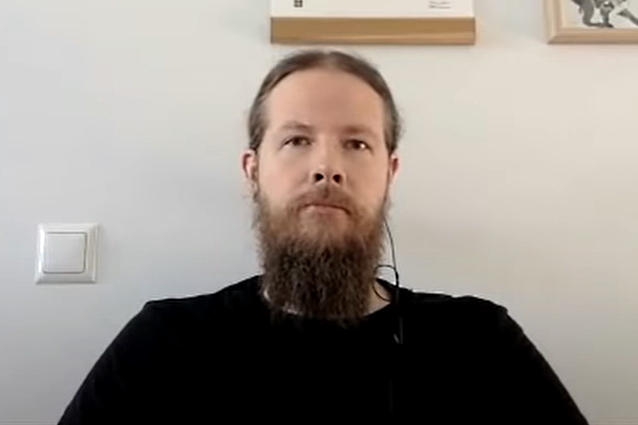 WINTERSUN's Jukka Koskinen spoke to Kaaos TV about his new gig as the session bassist for NIGHTWISH's upcoming world tour in support of the "Human. :II: Nature." album.

Koskinen joined NIGHTWISH as the replacement for Marco Hietala, who announced his departure from NIGHTWISH in January, explaining in a statement that he hadn't "been able to feel validated by this life for a quite a few years now."

Speaking about how he landed the NIGHTWISH job, Koskinen said (as transcribed by BLABBERMOUTH.NET): "It was a few months back. I received a phone call from the NIGHTWISH camp and was being asked if I would be interested [in] the bass player position regarding what has happened, that Marco has left the band. And, of course, obviously, when I got that phone call, I thought it was, like, 'Woah.' As an outsider, obviously, I couldn't think that, especially in NIGHTWISH, I couldn't think of it even that this sort of thing could happen. But, of course, life is life. And, yeah, absolutely, I immediately, of course, said that yes, definitely I would be interested. I always listened to NIGHTWISH; I always liked their music a lot. [It's] very soulful music. That was a few months ago. And then we made a few arrangements. Two months ago, approximately, I was in Finland practicing. I had a meet-and-greet. We had a meet-and-greet before as well, but another one where we practiced together for the first time to see how, playing-wise, the chemistry was going, and get to know each other more. Kind of [like] an audition — obviously, of course. Any band who would find new guys to come in or so, you would need to have these things. I would do the same if I would be on the other side of the table, if you know what I mean. So, yeah, everything went good. After the audition thing, everything went very smoothly, and the guys said, 'You're in.' And what did I say more than with the happiest smile, I said back [to them], 'I'm in.' But we're talking, of course, as a session musician spot now for the upcoming 'Human. :II: Nature.' tour."

Asked if he had ever played any NIGHTWISH songs in the past, Jukka said: "No, I hadn't played [any of that material]. I've listened to NIGHTWISH ever since the early Spinefarm days, when they were [signed to the label] — [1998's] 'Oceanborn'; maybe from that [album] onwards. Music-wise, I played in the past with a few kind of, like, not similar, but maybe that style or genre of music in the past. But I never played NIGHTWISH music. That was kind of, like, from a player's point of view, I couldn't believe it that when I started practicing the songs, or trying them out even before everything was settled, I just thought that I would try it out, it just felt that my playing style is something that really fits to this — I had this feeling. And it was really, really, of course, great to see then afterwards, hearing from the other guys — they basically told me that 'it feels like you've always been playing bass here.' It felt very natural."

Koskinen made his live debut with NIGHTWISH last weekend at the first of the band's two interactive "An Evening with Nightwish In a Virtual World" concert experiences that kicked off the "Human. :II: Nature." run. NIGHTWISH performed in a tavern called "The Islanders Arms" built in a virtual world for two nights — Friday, May 28 and Saturday, May 29. On both nights, the fans experienced a one-and-a-half-hour performance, hearing songs live off "Human. :II: Nature." for the first time ever. These two nights had their own, slightly different setlists.

Last month, NIGHTWISH keyboardist and main songwriter Tuomas Holopainen said that Hietala's decision to leave the band "came as a bit of a surprise." He added: "It was a really tough pill to swallow. And for a few days, I was actually quite confident that there's no coming back, that this is it. I remember talking to Emppu [Vuorinen], the guitar player, and we were, like, 'You think this is it?' 'Yeah, I think this is it.' I mean, enough is enough. So much has happened in the past. Something that broke the camel's back, as they say. Then, after some time had passed — a few days — we started to think that it's been such a ride of 25 years, with so many ups also, that this is not the way to end it."

Tuomas elaborated on NIGHTWISH's reasons for carrying on, saying: "I think we still have something to give, and that's the main point. The music is still there. We felt that there's still so much music that needs to come out from this band that, 'Okay, let's give it one more shot.' And then finding the new bass player was really easy."

He added: "It's not like we do this just because we need to do it and there's nothing else to do. On a personal level, I feel that there's still so many stories and melodies that I want to share with the world with one lineup or another, so that's why you want to continue and keep on going.

"I've said this a million times, that a lineup change is the ultimate energy vampire, and that's how it really felt and still feels."