MR. BIG will release a new live set, "Raw Like Sushi Mega Edition - Revive 2017: 2017 Japan Tour Official Bootleg Box", on February 24. A complete collection of MR. BIG's 2017 performances in Japan, it features all nine concerts which took place between September and October of that year.

Speaking to Rodrigo Altaf of Sonic Perspectives about how the live release came about, MR. BIG singer Eric Martin said: "A couple of months ago, I got an e-mail from our record company in Japan saying that they recorded all nine concerts — Pat Torpey's last shows, as well, in Japan — but all nine concerts in Japan. I even called Michelle Sabolchick, who's our sound engineer, and has been for the last 10 years — live sound — and I go, 'Did you see any Pro Tools equipment? You're front of the house. Did they record?' And she goes, 'Nobody was recording around me.' And I'm, like, 'How did you guys do that? We didn't even sign off on it or anything.'

"I didn't realize this, but they kind of did it every year that we were there; I just never knew it," he continued. "And they did it on the monitor board. So they have the monitor mix of all nine concerts. Anyway, that being said, they mixed it, and what it is is nine shows, a lot of the same songs, different energy in different cities, and there's about three or four shows that have a medley of songs that we never freakin' play live — switching instruments and that kind of thing, if you've ever seen a MR. BIG concert. It's pretty good. I'm glad that they captured it. And I'm glad I didn't know about it, because if I knew about it, I'd get all scared."

Last November, MR. BIG bassist Billy Sheehan said that no decisions have yet been made regarding the band's future following the passing of Pat Torpey. The drummer died in February 2018 at the age of 64 from complications of Parkinson's disease.

Speaking to FOX17 Rock & Review about MR. BIG's legacy, Sheehan said: "It was quite a band. We had incredible success with the band, especially internationally, which worked out really nice for us, 'cause right around the mid-'90s, the world went grunge — well, the U.S. and Europe kind of went grunge, but everywhere else, it didn't, so South America, Southeast Asia and all those places, we could still sell out shows and do really well.

"We had a great run," he continued. "We still exist, but, as you know, sadly we lost our drummer, and we don't have any plan at this point for anything. We'll just let nature take its course. At some point, maybe we'll do something again. We don't know. Maybe me and Paul [Gilbert, guitar], maybe me and Eric [Martin, vocals], maybe Eric and Paul, maybe us with a different drummer — it could be anything — but we have not discussed it at all, and we're just kind of letting it go.

"It was tough for us [to deal with Pat's death]. The four component parts had to be there in order for it to be MR. BIG. But we appreciate [the support]. I still get a lot of e-mail every day regarding MR. BIG and our songs. Some amazing e-mails from people that, you begin to realize how you touch people around the world. Some little girl in Pakistan is having a hard time, and she listens to our music, and now everything's okay again. [It's] pretty amazing."

Last May, Sheehan gave an interview to the "Music Mania" podcast in which he claimed that a "mastering problem" with MR. BIG's latest album, "Defying Gravity", which came out three years ago, made the LP "unlistenable." He went on to say that "the label ruined the record" by insisting on having the album and "putting it out when it's not ready." He explained: "If we had another day to get it to proper mastering and get it done right, it would have been fine. 'Cause I was there for the final mixes — I went in there every day and listened to mixes. Pat was there with us too. We went through the mixes, and they were sounding great. And, unfortunately, we got screwed.

"I've seen it before in many other situations with many other bands," he added. "We've got the marketing department and they're ready to go and they've gotta have the record now. And then I've also seen other bands just say, 'No. The record is not done. You're out of luck.' And I wish we would have just said that, because I just don't think the record had the kind of life it had when I heard the final mixes."

"Defying Gravity" was released via Wowow Entertainment, Inc. in Japan and Frontiers Music Srl in most of the rest of the world.

After announcing his Parkinson's diagnosis in 2014, Torpey continued to write, record and perform with MR. BIG, who also recruited Matt Starr to share drum duties.

MR. BIG, formed in 1988, produced numerous hit songs that ranged across a wide array of rock genres — be it ballads, heavy metal, or blues rock. Their hits include "Alive And Kicking", "Just Take My Heart" and the chart-topping ballad "To Be With You". 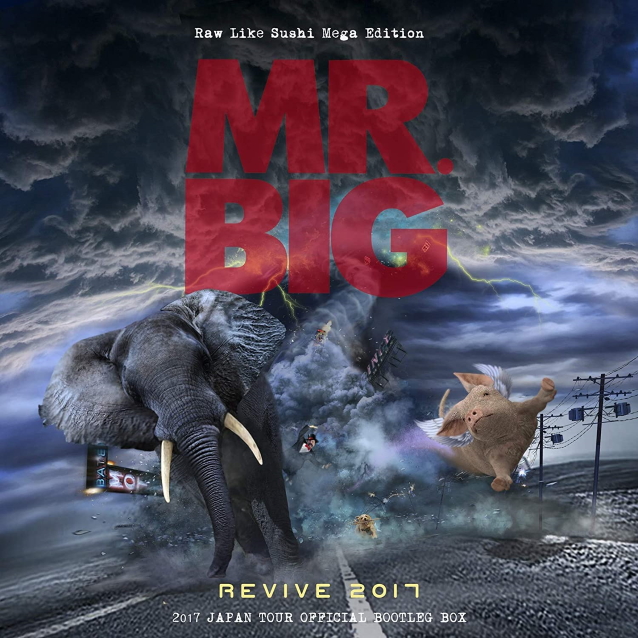