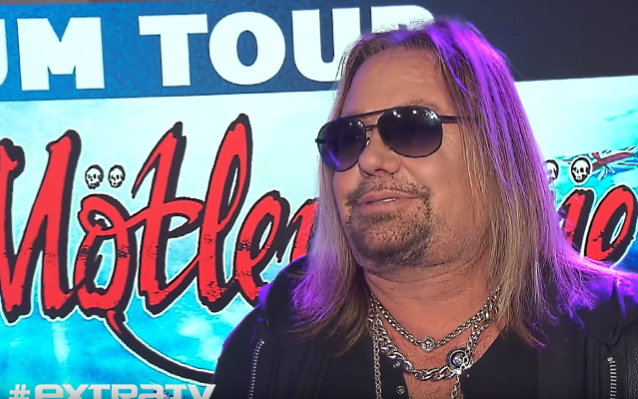 Legendary rock band MÖTLEY CRÜE is joining forces with DEF LEPPARD, POISON and JOAN JETT & THE BLACKHEARTS for "The Stadium Tour" next summer.

"Extra" music correspondent Adam Weissler caught up with the four members of the CRÜE at the December 4 press conference announcing the trek, and he asked them how they are preparing for the highly anticipated 2020 shows.

Asked how it feels for the CRÜE to still be doing it "bigger than ever" nearly four decades into the band's career, Nikki said: "I think for us, it was always about the show — it was a very important thing for us — but it was really about the music. And that's what's cool, to see the music holding up for so many years. And with the movie finding a new audience as well — they're discovering those same songs that we were working on 40, 30, 20, 10 years ago. That feels really good."

"The Stadium Tour" will kick off on June 21 in San Antonio, Texas and will include newly announced gigs in Kansas City, St. Louis, Minneapolis, Nashville, Cincinnati and Cleveland. The tour marks CRÜE's first live dates since wrapping its 2014/2015 farewell run. The band toured with POISON back in 2011 and DEF LEPPARD teamed up with POISON for a string of road dates in 2017 — but the upcoming jaunt marks the first time all four acts have hit the road together for an extended tour.

MÖTLEY CRÜE's longtime manager Allen Kovac recently addressed criticism of Neil for his supposed diminished singing ability and weight gain, as well as the health status of guitarist Mick Mars, who has been dealing with a chronic form of arthritis that led him to undergo a hip replacement.

"Some of them are working with a trainer, some of them are working with a nutritionist to make themselves the best they can be," Kovac told Fox Business. "The greatest insecurity for an artist is: Is anyone going to care about my music? Is anyone going to buy a ticket? We were in November when the discussions were happening, and these guys were already into regimens of how they get ready for a tour."

Speaking specifically about Neil, Kovac said: "Let's see what Vince sings like and looks like when the tour goes out."

During a 2014 interview with SouthFlorida.com, Neil was asked if he has a daily regimen to stay in shape while on the road. "You're running for two hours on stage every night. That pretty much keeps you in shape," he replied. "It is a regimen. Usually on the day of the concert, I'll get to the [venue] around 4 p.m. We always have a meet-and-greet at 5:30 p.m. Then I go relax on my bus until 8 p.m. I get dressed and I'm onstage at 9. That's the way it is every day."

In a 2011 interview with the San Antonio Metal Music Examiner, Vince talked about the differences between singing for two hours on stage every night and athletes and ordinary people running 26.2 miles for two hours. "Yeah, it's two different kind of marathons," he said. "I use a pedometer, and I run just about 10-12 miles a night. It's different, though. One thing that's different is you're singing. And you do stop and talk to the crowd. But what these athletes do, it's amazing."