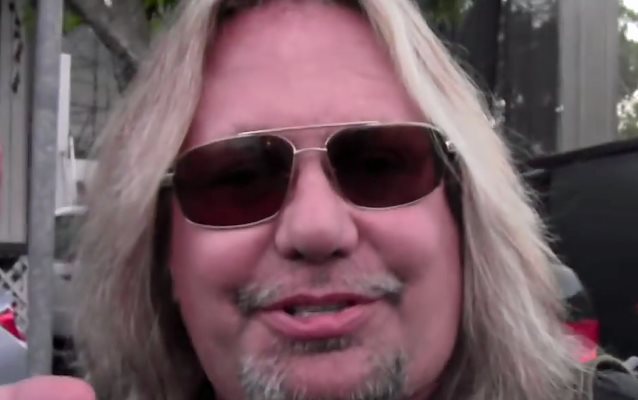 Video footage of MÖTLEY CRÜE frontman Vince Neil talking about his experience with LASIK Of Nevada — described as "the home of the most experienced and specialized LASIK practice in Las Vegas and Reno, Nevada" — can be seen below.

As previously reported, Neil earlier in the month struck a deal to avoid jail time in connection with a misdemeanor battery charge related to an incident where he allegedly assaulted an autograph seeker.

The singer's lawyers, David Chesnoff and Richard Schonfeld, appeared in court for him on October 19 and pled guilty to misdemeanor battery. Neil will have to pay $1,000 and spend 6 months on informal probation. He's also been ordered to undergo impulse control counseling.

This isn't Vince's first brush with the law. Back in 2011, he served 10 days of a 15-day DUI sentence in connection with a June 2010 incident when he was speeding and weaving between lanes on Desert Inn Road west of Paradise Road, near the Las Vegas Strip, authorities said.

Neil was charged with vehicular manslaughter and driving under the influence of alcohol. His blood alcohol level was 0.17, which was over the legal limit.

Neil served half of a 30-day jail sentence, received five years probation and had to pay $2.6 million in restitution, as well as perform 200 hours of community service.