MOTIONLESS IN WHITE has announced a major U.S. headline tour. The new dates begin September 29 at Jacksonville, North Carolina's Tarheel and run through late October. Support throughout comes from special guests WE CAME AS ROMANS, AFTER THE BURIAL and TWIZTID. Limited VIP packages for "The Trick 'R Treat Tour" will be available beginning Tuesday, August 6 at 11 a.m. ET. General on-sale for the tour begins this Friday, August 9 at 10 a.m. local time.

Meanwhile, MOTIONLESS IN WHITE is currently continuing its busy live schedule as special guests on the ALICE COOPER and HALESTORM 2019 U.S. tour, with dates set through mid-August. The band is also set to light up an array of upcoming festivals, including Louisville, Kentucky' Louder Than Life (September 27), Sacramento, California's Aftershock (October 11) and San Bernardino, California's Self Help (October 12), while also finding time for a special double bill alongside IN THIS MOMENT, set for Greensboro, North Carolina's Piedmont Hall on September 28. November will then see MOTIONLESS IN WHITE crossing the Atlantic for a much-anticipated European headline tour highlighted by stops in Russia, Germany, the Netherlands, Denmark, Sweden, Germany, Italy, Austria, Switzerland, France, and the United Kingdom.

The non-stop touring celebrates MOTIONLESS IN WHITE's acclaimed new album, "Disguise", available now at all DSPs. "Disguise" is highlighted by a series of stellar singles, including "Brand New Numb", "Undead Ahead 2: The Tale Of The Midnight Ride" and "Disguise", the latter joined by a haunting companion video directed by frequent collaborators Jeremy Danger and Travis Shinn. In addition, "Brand New Numb" was recently joined by an official visual, directed by Max Moore.

Comprised of lead singer Chris Motionless, guitarists Ryan Sitkowski and Ricky Horror, drummer Vinny Mauro, and bassist Justin Morrow, MOTIONLESS IN WHITE has won over audiences around the globe with its aggressive music and arresting imagery, firmly placing them amongst the upper echelon of modern rock. 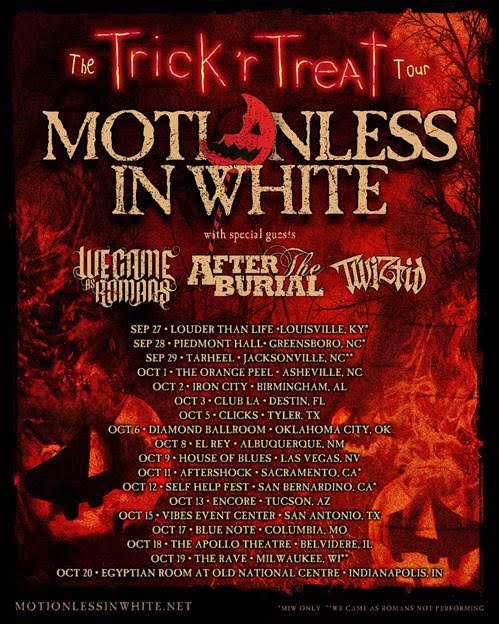