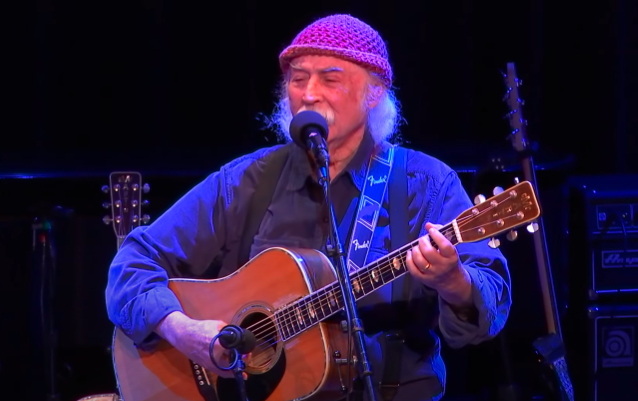 With more than a hundred million pageviews on the books in 2020, this list could rally for miles. For brevity's sake, we've narrowed it down to the top 20 stories — ranked in terms of unique pageviews — as a snapshot of the year that was; tragic losses, tours that never materialized, and an unexpected No. 1 featuring David Crosby.

A video message from MÖTLEY CRÜE singer Vince Neil to a superfan has gone viral. Neil was recently asked to send a birthday message on Cameo, which lets users hire celebrities to record brief, personalized video messages about virtually any topic.

03. GODSMACK's SULLY ERNA Says NEIL PEART 'Was In A Wheelchair And He Couldn't Speak' In Months Leading Up To His Death

In an interview with Mistress Carrie of the Boston radio station WAAF, Sully Erna of GODSMACK opened up about the passing of Neil Peart and the profound impact the legendary RUSH drummer had on his musical upbringing.

04. WOLFGANG VAN HALEN: DAVID LEE ROTH 'Has All The Right In The World' To Perform VAN HALEN's Classic Songs

Wolfgang Van Halen says that David Lee Roth has "all the right in the world" to perform VAN HALEN songs live with his solo band.

MÖTLEY CRÜE, DEF LEPPARD, POISON and JOAN JETT & THE BLACKHEARTS are expected to issue an official statement regarding the status of their previously announced "The Stadium Tour" on Monday, June 1.

German industrial metallers RAMMSTEIN have shot down a report that singer Till Lindemann has tested positive for COVID-19, the disease caused by the new coronavirus.

METALLICA will launch a new concert series, "#MetallicaMondays", where the band will stream the complete video of a METALLICA live show for fans on the group's YouTube channel and on Facebook every week.

Eddie Van Halen has passed away after a long battle with cancer. The legendary VAN HALEN guitarist was 65 years old. His death was confirmed by his son, and VAN HALEN bassist, Wolfgang Van Halen.

09. Here Is A New Photo Of VINCE NEIL At Country Concert In Tennessee

A brand new photo of Vince Neil has emerged online. The MÖTLEY CRÜE singer took to his social media Saturday night (February 1) to share a new picture of him "hanging out" with his "buddy" Mike Wolfe, star of the long-running, treasure-hunting History Channel series "American Pickers".

Ozzy Osbourne's 2020 North American "No More Tours 2" has, unfortunately, been canceled to allow the legendary heavy metal singer to continue to recover from various health issues he has faced over the past year.

CORROSION OF CONFORMITY drummer Reed Mullin has died. He was 53 years old. His bandmates confirmed his passing in a social media post earlier tonight.

12. RUSH's Longtime Friend Says Claims That NEIL PEART Couldn't Speak Before His Death Are 'Not Accurate'

Donna Halper — the woman who is credited with discovering RUSH while working at an Ohio radio station back in 1974 — says it is "inaccurate" to say that drummer Neil Peart was unable to speak in the months leading up to his death.

14. OZZY OSBOURNE's Daughter AIMÉE Looks Back On Her Decision To Not Participate In 'The Osbournes' TV Show

Aimée Osbourne, the eldest daughter of Ozzy and Sharon, has opened up again about her decision to not participate in the family's reality TV show, "The Osbournes". Aimée, who was only 15 years at the time, reportedly went as far as to move out of the family home in an effort to stay away from the cameras.

15. RAMMSTEIN Is Coming To North America

RAMMSTEIN is teasing what appears to be a short tour of North America. Earlier today, the German industrial metallers shared a map of the continent with several highlighted states, including California, Texas, Minnesota, Illinois, Maryland, Pennsylvania, New York and Massachusetts.

Sean Reinert, longtime drummer for progressive/technical metal pioneers CYNIC, has died. He was found unresponsive at his California home Friday night (January 24). No cause of death has yet been revealed. He was only 48 years old.

According to TMZ, founding AEROSMITH drummer Joey Kramer has filed a lawsuit against his bandmates, claiming that they are not allowing him to return to the group after a temporary disability.

18. Late WARRANT Singer's Ex-Wife Says He Admitted To Her He Was Once Drugged And Raped By Member Of Famous Heavy Metal Band

Bobbie Brown, an actress and model and probably best known as the video vixen in WARRANT's "Cherry Pie" video, spoke to Fox News about her second book, "Cherry On Top", which was released last summer via Rare Bird Books. Subtitled "Flirty, Forty-Something And Funny As F**k", the tome, co-written with Caroline Ryder, is a sequel to Brown's 2013 memoir "Dirty Rocker Boys".

David Lee Roth has broken his silence on the passing of his longtime VAN HALEN bandmate Eddie Van Halen. A few minutes ago, Roth tweeted out a photo of him and Eddie in what appears to be a backstage area at an undisclosed venue, and he included the simple caption: "What a Long Great Trip It's Been.."