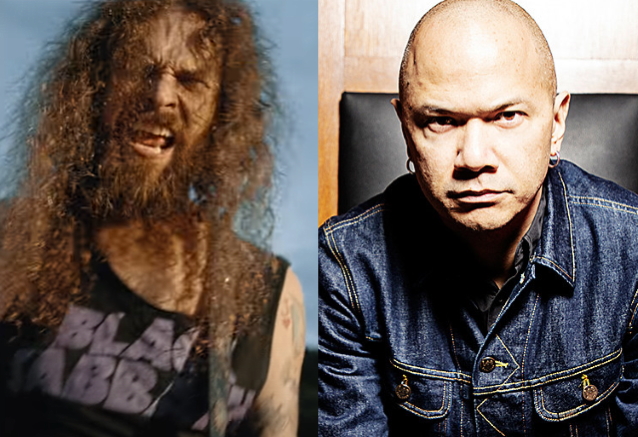 MONSTER TRUCK frontman Jon Harvey says that he was "super offended" by Danko Jones's recent criticism of his collaboration with Kid Rock.

On Friday (November 19), Kid Rock released his latest single, "Don't Tell Me How to Live", in which he rants against "woke" culture and the mainstream media at a time when "every opinion has a millennial offended." The first new music from the Michigan-bred rap-rocker since 2017, which was recorded with MONSTER TRUCK and plays off the Canadian band's 2015 song of the same title, was accompanied by an official music video which features Kid Rock telling his critics to "kiss my ass" and "suck a dick sideways" while wearing a white fur coat, a nod to his "Devil Without A Cause" days, along with basketball shorts, tube socks, chains and a fedora. Rock and Harvey trade vocals, smoke cigars and generally seem to be having a good time as Rock compares himself to some of the greatest icons of our time in what Rolling Stone calls, "the most offensive verse in the terrible song." "I'm like Reverend Run or David Lee Roth / Like Springsteen bitch, I'm the motherfucking Boss," Kid Rock declares. "James Dean, shit / I'm more like Brad Pitt / A little less pretty but I slang more dick."

On Saturday (November 20), Danko Jones, who was born and raised in the eastern-Toronto borough Scarborough, took to his Twitter to offer his scathing opinion of Kid Rock's new song as well as to call out the members of MONSTER TRUCK for choosing to align themselves with the conservative rocker, saying it gets them "a lifetime membership in the douchebag hall of fame."

"Disappointed to hear of a certain band on a song with a certain musician who has been so public with his MAGA politics, including uttering the phrase 'Fuck Colin Kaepernick' during a live performance," Danko wrote. "It's tantamount to standing in solidarity with him. Gross. And the video of them posing as rednecks in fur coats is FUCKING EMBARRASSING Disappointed and embarrassed FOR that band.

"Just so you know, I DON'T FUCK WITH bands that buddy up next to a racist POS. Wearing fur coats, sporting guns and smoking cigars in the music video gets that band a lifetime membership in the douchebag hall of fame. Embarrassing.

"Kid Rock said 'Fuck Colin Kaepernick' during a concert," Danko added. "Colin Kaepernick sacrificed his career to draw attention to racial inequality. If you stand alongside Kid Rock in a music vid calling out 'snowflakes', sporting fur coats & guns, you're as big a piece of shit as Kid Rock."

Harvey, who hails from Hamilton, which, like Scarborough, is located in the Canadian province of Ontario, discussed his Kid Rock collaboration during an appearance on the "Loaded Radio" podcast. Regarding how he first reacted when he heard Kid Rock's reworked version of "Don't Tell Me How to Live", Jon said (as transcribed by BLABBERMOUTH.NET): "When I read the lyrics and everything else, I'm, like, 'Okay. Crap. Here we go.' It seemed like a weird thing to me. It was conflicting, because it felt mad and angry. And we're not angry guys; we're like the fun guys. And I was, like, 'This is angry. Okay. Cool.' And even Kid Rock was, like, 'It's kind of mad, but that's the whole thing. The whole thing is to spice it up and get mad,' and things like that. I started reading through the lyrics and everything else, and it's like — I don't know — he's really kind of just talking about himself a lot. Like any hip-hop song would definitely be — 'I'm the best. This is what I do.' And then he says a couple of things, like 'snowflakes.' And I'm, like, 'Well, okay. Whatever. That could be taken in a weird way.'

"It's just one of those things. When you read it, you're, like, he's not really attacking anyone," Harvey continued. "He's kind of saying, 'This is who I am, and this is what I do.' And people are gonna take it as an attack, because everyone wants to feel attacked or feel like they need to fight back or say something all the time now. So he kind of played right in to that."

Harvey then addressed Jones's criticisms directly, saying: "I don't want this to come across the wrong way, but it feels a little opportunistic to me. It also feels like he's a very angry person. I don't subscribe to that, and I'm not an angry person. And to me, it feels like he kind of gets angry about a lot of things. As far as personal attacks go, I've never met this guy in my life. I have no idea what his values are or what his beliefs are, and nor do I care, 'cause that's his problem and his business. But, yeah, man, he went after me, didn't he?"

He continued: "That's my whole thing about it — the guy is upset because he thinks [the song] promotes hate, and he's getting that out by hating it. It's the most contradictory, hypocritical thing I've ever experienced. But also a lot of people are gonna be, like, 'Yeah, he's right.' And I'm just, like, 'Man, okay.' And then next week he'll be mad about something else James Hetfield did or something else someone else did. It's, like buddy, just simmer down. You've got some shit to sort… It's an opportunity — that's the issue I have with it. It's, like, he could have said nothing and just kept going with his life. But instead he's putting himself out there and putting that hate out there and it's creating an opportunity for him. That's super weird to me."

Jon added: "I've never called anyone a piece of shit to their face, I don't think, in real life. The dude didn't even use my name, didn't use the band name, and he said these harsh things to me personally. I don't know, man. I'm really hurt by that… It's super offensive. My mom's gonna read that article, and other people are, and this guy is really painting me out to be something… He's got no idea what I'm like; he's got no idea what my friends or my family are like. It's some pretty harsh shit."

Kid Rock, an ardent supporter of former president Donald Trump, made headlines earlier this year when his Nashville bar hosted Morgan Wallen for his first performance since being caught on camera saying the N-word back in February.

Back in November 2019, Rock was removed from the stage of the Honky Tonky bar in Nashville when he went on an explicit tirade against Oprah Winfrey, saying she could "suck a dick sideways." And in 2018, the rocker was fired as the grand marshal of the Nashville Christmas parade after calling Joy Behar, then-host of ABC's "The View", a "bitch" in an interview on Fox News.

Playing the victim days after releasing an “anti-snowflake” anthem coupled with gun imagery is right out of the alt-right playbook.


Also, framing me as “angry” is an old overused RACIST TROPE. It’s exactly what racists do.https://t.co/BduYOB4ycG

Disappointed to hear of a certain band on a song with a certain musician who has been so public with his MAGA politics, including uttering the phrase “Fuck Colin Kaepernick” during a live performance.
It's tantamount to standing in solidarity with him.
Gross.

And the video of them posing as rednecks in fur coats is FUCKING EMBARRASSING
Disappointed and embarrassed FOR that band. https://t.co/KZEHIX8evz

I think it's fitting that Kid Rock's piece of shit song, “Don't Tell Me How To Live”, is released on the day of the Kyle Rittenhouse verdict.

Just so you know, I DON'T FUCK WITH bands that buddy up next to a racist POS.


Wearing fur coats, sporting guns and smoking cigars in the music video gets that band a lifetime membership in the douchebag hall of fame.

If you stand alongside Kid Rock in a music vid calling out “snowflakes”, sporting fur coats & guns, you're as big a piece of shit as Kid Rock.

I have an aversion to racists and their enablers/protectors/sidekicks.

I’m glad they’re broadcasting their alt-right tendencies. It’s the heads up I need to avoid that band.

Aside from the absolute cluelessness of this tweet, having biracial kids doesn’t exempt one from being a racist.


As a mixed kid myself, I should know, as I’ve witnessed it firsthand. https://t.co/2kgdy1IxhK

As a POC speaking out against associating with racists, I should stay in my place, @JamesVerner2???


It’s astounding the amount of people who are salivating at the opportunity to cosplay as my overseer. https://t.co/TGjCBd5FhZ

This tweet is the perfect example of a Kid Rock fan. https://t.co/uwf1PXSniE