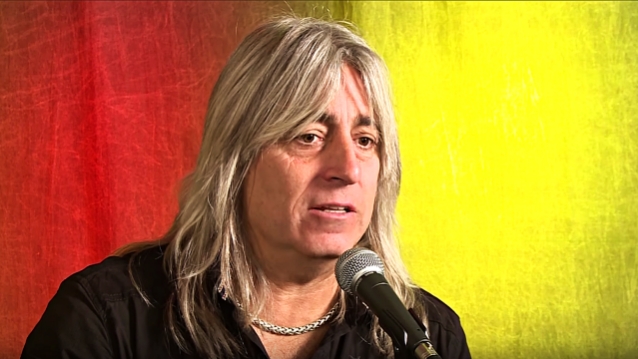 Former MOTÖRHEAD and current SCORPIONS drummer Mikkey Dee has paid tribute to Timi Hansen, saying that was "a pleasure to be playing with such a bass player" during KING DIAMOND's early years.

Hansen died on Monday (November 4) after a long battle with cancer. His death was confirmed by his former bandmate, MERCYFUL FATE singer King Diamond.

Timi went public with his diagnosis in early August after it was announced that he wouldn't participate in MERCYFUL FATE's 2020 reunion. Filling in for him will be ARMORED SAINT and FATES WARNING bassist Joey Vera.

Earlier today, Dee, who played with Hansen for the first three years of KING DIAMOND's existence between 1985 and 1988, tweeted a mid-1980s photo of him with the bassist, along with the following caption: "Ooo Im so sad that my brother in arms past away. We had so much fun together and what a pleasure to be playing with such a bass player in our early years. My brother, my buddy I LOVE YOU MY FRIEND. RIP Timi Hansen!"

Ooo Im so sad that my brother in arms past away. We had so much fun together and what a pleasure to be playing with such a bass player in our early years. My brother, my buddy I LOVE YOU MY FRIEND. RIP Timi Hansen! pic.twitter.com/PDSQ1ieQxE