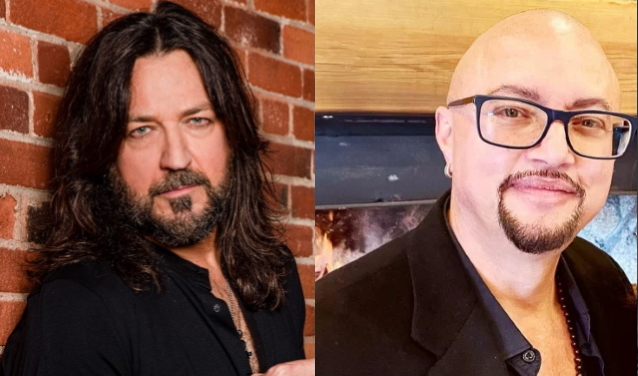 STRYPER frontman Michael Sweet says that he turned down an opportunity to produce an album from former QUEENSRŸCHE singer Geoff Tate because he "didn't want to cause any problems with the friendships" he has with members of the current QUEENSRŸCHE lineup.

Sweet shared the details of his proposed collaboration with Tate in a social media post on Wednesday (December 1). He wrote: "Interesting story: I had the opportunity to write and produce an album for Geoff Tate. I was contacted by Frontiers Music srl and asked to do so. Geoff was also on board (hopefully he won't threaten my well being by saying so). Although I thought long and hard about the opportunity, I didn't want to cause any problems with the friendships I have with the band. And there were a few other factors involved as well.

"Fast forward a few months later when I was in Brazil performing a solo acoustic set and guess who's sitting right in front of me, front and center? Geoff Tate and his wife Susan! Let's just say that I was sweating a little more than usual that night;-) Geoff and Susan were gracious, kind and sat through the entire set and were even singing along to a few tunes. I of course announced that Geoff was there as he raised his glass of wine to the crowd. It was a night to remember for sure.

"After the show I met with Geoff and Susan backstage and we discussed the possibilities. I wasn't definitively certain that I would not be working with him at that moment so we left it with 'let's talk soon' and that was it. When I returned home I decided that it wouldn't be in the best interest of either one of us to work together. At least at that time.

"Although I've never really gotten to know Geoff, he was gracious to me and treated me with respect. It was and is a moment in time that I will never forget."

Back in 2014, Sweet told "The Shoe With Miles Schuman" radio show that the settlement between Tate and his former bandmates in QUEENSRŸCHE over the rights to the group's name "worked out for the best. Even though Geoff, obviously, is well respected and people know who he is — he's got such a name and [was] such an integral part of the QUEENSRŸCHE of the past — QUEENSRŸCHE is, in my opinion, the band," he explained. "The band, with Todd, that, to me, is QUEENSRŸCHE. It'd be like me continuing on by myself and saying that I'm STRYPER. That's not right, and that's not the way it is. So I think it worked out. The fact that they were able to work out their differences and move forward in a healthy way, I think it's awesome, and I have more respect for all of them."

He continued: "You know what? I love Todd, and I think they're an incredible band. Todd deserves to have and to get what he has, because he's such a great person and such an immense talent, and the world needs to see more of him, man, and the boys in QUEENSRŸCHE with Todd."

Regarding whether he understood why Tate initially wanted to continue using the name QUEENSRŸCHE for his new group even though none of Geoff's former bandmates wanted to work with Geoff again, Sweet said: "Sure, I do. Because you can't take the fact away that… and you can't change the story that Geoff isn't a talented guy. I think he was voted one of the best singers of all time, and he loves music and loves to perform, I'm sure, and that's his passion. So you don't wanna take that away from him. But at the same time, there's integrity and there's a way to do things, and there's a wrong way to do things. But then again, I wasn't in QUEENSRŸCHE, so I don't know every little detail and I'm not the authority on all things QUEENSRŸCHE. I just know what I believe, and I know Todd personally, and I know the guys personally. And I just have to say that I admire them as people. Eddie [Jackson], Scott [Rockenfield]… all of them… Michael [Wilton]… I mean, they're all just good guys, man, and they're such a great band, and they deserve what they're getting; they deserve to move forward with the name, I think."

I had the opportunity to write and produce an album for Geoff Tate. I was contacted by Frontiers...