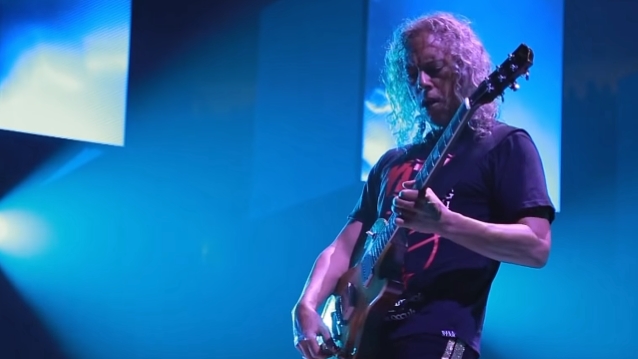 METALLICA drummer Lars Ulrich has shared video footage of guitarist Kirk Hammett taking a tumble during the band's September 11 concert in Sioux Falls, South Dakota. In the short Instagram clip, which can be seen below, Ulrich can be seen mocking Hammett by pretending to also fall on stage.

According to the Argus Leader, METALLICA's show at the Denny Sanford Premier Center in Sioux Falls set an attendance record. More than 12,000 fans came to see the band perform — more than the previous record-setting crowd for Carrie Underwood in October 2016.

Both METALLICA and Underwood featured a stage in the middle of the Premier Center floor, opening up seats on the east side of the area. And both shows opened the entire floor to general admission standing room, with no seats.

METALLICA kicked off the 2018/2019 U.S. leg of the "WorldWired" arena tour on September 2 at the Kohl Center in Madison, Wisconsin.