An unprecedented lineup has been announced for the 11th annual Rock On The Range, May 19, 20 and 21 at MAPFRE Stadium in Columbus, Ohio.

Rock legends METALLICA, SOUNDGARDEN and KORN will each headline one night of America's largest and most-acclaimed rock festival. Overall, Rock On The Range 2017 — fueled by Monster Energy — will feature over 50 bands performing on three stages, plus rock's favorite comedians in the ROTR Rolling Rock Comedy Tent, The Music Experience, art installations, and unique onsite activities during the three-day weekend.

Rock On The Range 2017 presale and layaway tickets, as well as limited numbers of new Weekend Field VIP tickets and Premier (hotel and camping) Packages, are on sale now at RockOnTheRange.com.

The ROTR Rolling Rock Comedy Tent will feature sets from nationally known comedians plus Columbus's top comedy talent. The full comedy lineup will be announced in the coming weeks.

Jonathan Davis of KORN comments, "Rock On The Range is the pinnacle rock festival in America. I always feel that in the crowd and can't wait for our headline set in May. We're gonna come at you with everything we've got — expect a few surprises!”

Dexter Holland of THE OFFSPRING says, "Great lineup at Rock On The Range this year. THE OFFSPRING can't wait to finally be part of it all."

Gary Spivack, Rock On The Range co-executive producer for Danny Wimmer Presents, says: "After our record-breaking ten-year anniversary it was high time to raise the bar and have the world's best rock bands jump over it. We couldn't be more honored to have METALLICA and SOUNDGARDEN at Rock On The Range! But why stop there? To have bands such as KORN, VOLBEAT, PRIMUS, PAPA ROACH, THE OFFSPRING and so many more truly makes this year's Rock On The Range our best one yet. May 19-21 can't come soon enough."

In 2016, tickets for Rock On The Range sold out over two months in advance, marking the fourth consecutive advance sell-out for Rock On The Range — so fans are encouraged to buy early and save. Each ticket price level has a limited amount of tickets available, so fans can save more by buying earlier. Ticket prices will automatically move to the next price level once an allotment sells out, beginning at the presale.

Those looking for an expanded festival experience are invited to purchase Premier Hotel Packages (which include festival tickets and t-shirts) or Camping Packages.

For an even more exclusive Rock On The Range opportunity, fans can purchase the new Uber Ranger Glamping Package for four people, which includes amenities such as a Luxury RV on a double campsite at the Ohio Expo North Campground (May 18, 19, 20, 21), a dedicated concierge with golf cart shuttle, 4 Weekend VIP Field Admission Tickets, a backstage tour, access to the stadium club (with catered lunch and dinner), access to the Side Stage Viewing Platform, access to the VIP Lounge, and more. ]

The general onsale is Friday, December 2 at 10:00 a.m. EST. Beginning at that time, tickets will be available at RockOnTheRange.com, at Ticketmaster locations and the MAPFRE Stadium Box Office.

Rock On The Range celebrated its tenth year in 2016 — and after a decade of setting the standard for American rock festivals, the crown jewel of the World's Loudest Month showed no signs of slowing down, with "Rangers" from around the globe descending on MAPFRE Stadium. In 2016, the festival received awards of recognition from both Columbus mayor Andrew J. Ginther and the City Council, as well as a resolution from the Franklin County Board of Commissioners acknowledging the over $140 million in economic impact the festival has contributed to the city over its ten-year existence.

Rock On The Range is supported by our rockin' sponsors: Monster Energy, Bud Light, and Zippo. These partners, along with many others, will feature interactive experiences, artist meet-and-greets, and other unique fan engagement opportunities throughout the festival. 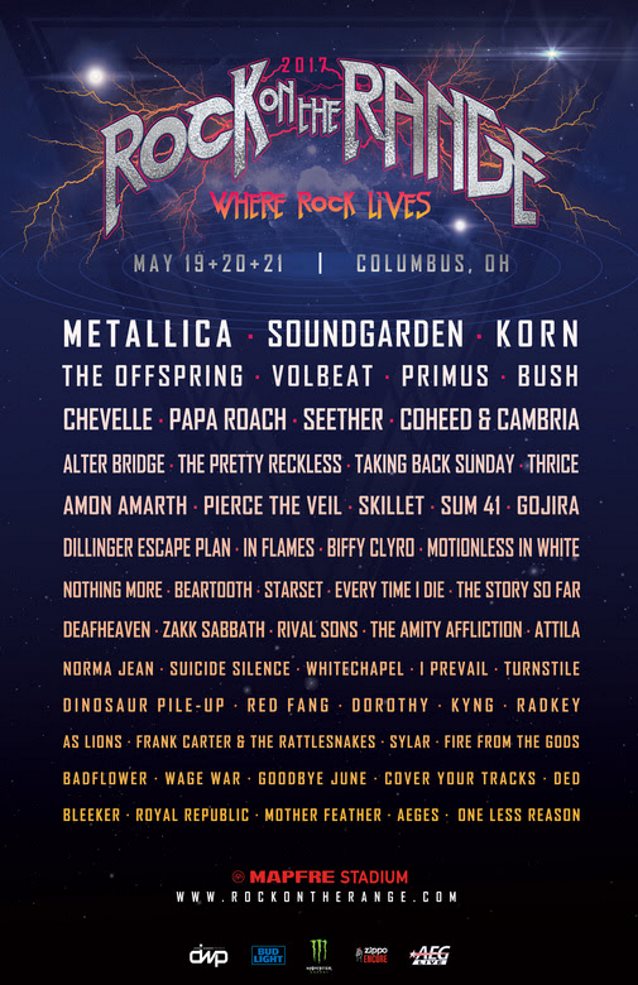