The beautifully designed "From The Riser" is a photographic celebration of many of today's greatest drummers and percussionists. It unashamedly captures the energy, emotion and elegance of the world's best, playing with the world's greatest bands.

The book features two hundred and seventy previously unseen photographs taken exclusively by the author. It includes over one hundred and thirty legendary drummers, among them:

Included alongside the many striking images is a record of Phillips's cherished collection of backstage passes, set lists and other memorabilia.

RUSH's Neil Peart, who penned the foreword for the book, says: "Not many photographers have captured that performance art as well as David. One accomplishment is simply collecting photographs, but the greater gift is delivering such iconic images."

John Fred Young (BLACK STONE CHERRY) sums it up: "What Dave does, he gets in there and he goes where only brave men go, in the fury of techs running crazy on stage, drum sticks flying everywhere… It's a dangerous world up there on stage!"

Phillips is an intuitive photographer who, as a drummer himself, demonstrates a natural affinity with his subjects particularly when working in a live environment. Capturing portraits of drummers has become second nature to him and his work in artist relations provides extraordinary contact with an incredible range of musicians and bands.

This ambitious book, with over one hundred and eighty pages, is a lavish tribute to drumming and drummers, which reflects Phillips's intuitive knowledge and deep respect of all things percussion. It is a complete compendium, packed with expressive, jaw-dropping photos. To get shots like this you have to understand drummers, drums and playing live.

"From The Riser: A Drummer's Perspective II" is only available to purchase from the author's web site. 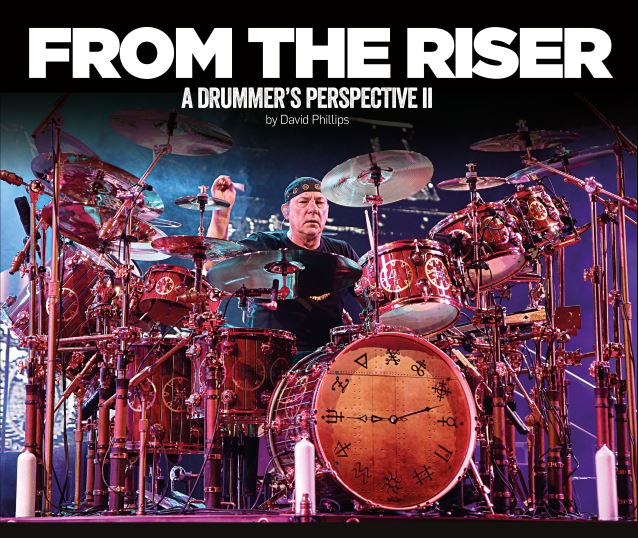