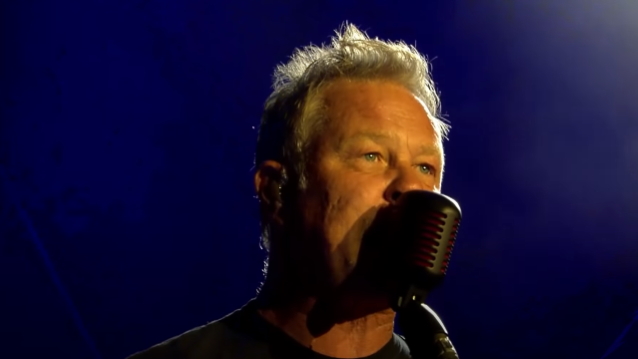 Professionally filmed video of METALLICA performing the song "Ride The Lightning" during its September 24 show at the Louder Than Life festival in Louisville, Kentucky can be seen below.

As previously reported, METALLICA also played the songs "For Whom The Bell Tolls" and "No Leaf Clover" at Louder Than Life as a contribution to the Global Citizen livestream, a worldwide charity event which was broadcast over 24 hours around the world on Apple Music, Apple TV app, YouTube and Twitter.

During an appearance last Friday (October 1) on SiriusXM's "Trunk Nation With Eddie Trunk", METALLICA drummer Lars Ulrich was asked what it has been like for him and his bandmates to return to the road for their first live shows since late 2019. "Very emotional on every level," he responded. "Obviously, it's invigorating and it's inspiring and it's just great to get back out there.

"I think it was just about two years, maybe a little over two years, since we stepped off stage at 'S&M[2]' in San Francisco. And, obviously, we did the drive-in thing last summer, we did an All Within My Hands virtual event and a couple of TV appearances, but in terms of live shows with live audiences and that real deal, it had been over two years. So I believe that in the six hundred years METALLICA's been going that that's been the longest absence from the live stage we've ever had.

"When we stepped on stage at The Independent in San Francisco about two weeks ago now, [we were] definitely nervous," Lars admitted. "[It was] a little daunting. 'How do we do this again? We hope the muscle memory will come back.' And, obviously, we'd been rehearsing and prepping and staying in shape, but you never know.

"So we had a great show in San Francisco. A week later, we had a great show in Chicago back at the Metro, which is where we played on the 'Kill 'Em All' tour. This was the infamous show where — I think it's in the 'Cliff 'Em All' video, and it's definitely made the rounds — where James [Hetfield, METALLICA frontman] is holding up the 'Kill 'Em All' album that had just been released, I think, within a week or two of when we were playing there. I think it's in 'Metal Militia'; we were doing a breakdown, sing-along thing, and he holds 'Kill 'Em All' up, and somebody in the audience snags it or jumps up and grabs it. So, lots of memories there. And full circle back, I guess, 38 years later. So, [it was] so much fun to be back there.

"That show was crazy fucking hot," Ulrich added. "They were having a September heatwave; I think it was, like, 95 [degrees Fahrenheit] every day in Chicago. And up on stage at the Metro there, which is up on the second floor, it was about 195 degrees; [we were] definitely gasping for air for some of that show. But those two were great. And then, [we went] down to Lousville a couple of days later and playing the Friday and the Sunday of the Louder Than Life festival, two completely different sets — no repeats [of songs], which I'm super proud of. Outside, Friday night, it's 60 degrees, I got a little elbow room up on stage. I have to tell you the muscle memory came back, actually, quicker on those bigger shows than on the smaller ones.

"But I was so happy to be back out there, so grateful to feel the energy of the fans and their patience through all this shitstorm of the last year and a half with COVID, and so happy to reconnect with the fellows and my brothers in the band and play music and share that experience once again with a live audience and being in the moment and just feeling it.

"I would say that all is very well in METALLICA in the fall of '21, but, fuck, I hope for the rest of our career that there's not another two-year absence from the live stage.

"So, it's been definitely a bit of a whirlwind — lots of emotions," Lars said. "But we're happy to be back out there and, like I said, happy to be connecting with everybody again. Obviously, [it's been] a little odd. We really have taken the COVID seriously and put ourselves in a bubble and not seen anybody.

"And you're at a festival like Louder Than Life, and your friends in JUDAS PRIEST are in the dressing room next door, and our friends in GOJIRA and our friends in VOLBEAT and our friends in DISTURBED and all our friends in all the different bands that we've had so many experiences with for decades are all over the place, and we wanna go hang out with them and engage. So it's been a little weird to not be able to do any of that and not do the meet-and-greets and see the fans — the fan-club meet-and-greets and all that signing stuff at the hotel — but we've taken the COVID stuff super seriously. And the flipside of that has been that our touring party, which, I guess, is — I don't know; what are we? 12, 14, 15 [people] — we've been having dinner together every night and we've been going to some movie theaters and hanging out, and it's actually brought the touring party super close. Because we've just been hanging and socializing with each other rather than running off in four different directions like a pack of marbles. So, it's been great. But, man, I'm so happy to be back at it again."