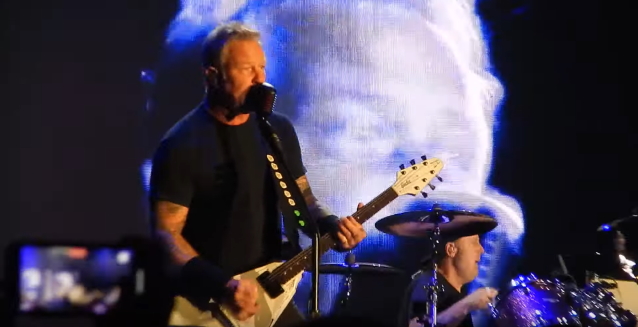 METALLICA played its classic self-titled album, commonly known as "The Black Album," in its entirety during its headline set last night (Sunday, September 26) at Louder Than Life festival in Louisville, Kentucky.

METALLICA performed the LP as part of its second headline set of the weekend at Louder Than Life, which hosted tens of thousands of people at the Kentucky Exposition Center.

After opening with three non-"Black Album" songs — "Hardwired", "The Four Horsemen" and "Welcome Home (Sanitarium)" — METALLICA performed the album's closing track, "The Struggle Within", and went through the entire LP in reverse order, finishing the main set with album opener "Enter Sandman". The band then returned for a two-song encore consisting of "Blackened" and "Creeping Death".

For its first show on Friday (September 24), METALLICA played a 16-song set that spanned its entire catalog, including "Whiplash", "Harvester Of Sorrow", "The Memory Remains", "Master Of Puppets", "Battery", "Fuel" and "Seek & Destroy".

METALLICA's setlist for Sunday, September 26 at Louder Than Life festival at the Kentucky Exposition Center in Louisville, Kentucky:

METALLICA previously performed The Black Album in its entirety at a number of European festivals in 2012.