IRON MAIDEN and METALLICA, the two biggest metal bands on the planet, will make history this summer when they co-headline the Sonisphere festival in Knebworth, the very first time both bands have appeared together on a British bill, and the only concerts either band will play in the U.K. IN 2014.

Both METALLICA and IRON MAIDEN headlined their first-ever Knebworth concerts under the Sonisphere banner and now these giants of the world stage return together to fly the Sonisphere flag once more; bigger and bolder than ever before. For the first time ever fans will have the chance to see both bands come together to head up what will surely make for one of the most historic festival bills in heavy rock music.

Vocalist Bruce Dickinson comments: "We all grew up in England well aware of the importance of the legendary concerts at Knebworth, and scarily, it all seems quite recent! Without being clichéd, it really is an honor and privilege to return to play there with the purpose of celebrating some of the finest moments in British rock history from inspirational bands like PINK FLOYD, THE WHO, [LED] ZEPPELIN, THE [ROLLING] STONES and GENESIS.

"This will be the last concert of our 'Maiden England' tour and it is very fitting to end a long and hugely enjoyable tour in our own backyard.

"We have tweaked the 'Maiden England' setlist a bit to make it more representative of our whole '80s era and to give the fans something a bit different, especially as this will be the last of our three tours with an historical perspective.

"If you are there on the day, it is highly likely that you will hear some of these songs played live for the very last time ever. So on an occasion like this, a celebration and the end of a chapter, you can be sure we will do our utmost to give our fans one hell of a show and go out with all guns blazing."

Also headlining will be one of the biggest selling rock acts of all time, METALLICA. Formed in 1981 by drummer Lars Ulrich and vocalist and guitarist James Hetfield, METALLICA are one of the most influential and successful rock bands in history. Next summer's performance by METALLICA will see the band delivering a "Metallica By Request" interactive setlist spanning their entire career.

Says Lars Ulrich: "This just works on all fronts:

"To be invited to co-headline the 40th-anniversary celebration at the legendary Knebworth House is truly a mindfuck. Considering the iconic bands whose performances at Knebworth are part of rock and roll history, it's not only a next level honor, but a somewhat humbling undertaking.

"And what could be more fitting on our third Knebworth go-around than to play an all-request set, chosen entirely by the fans?

"We are soooo excited about the limitless possibilities of our friends picking what songs METALLICA get to perform on this forthcoming evening from the nearly 140 songs we’ve recorded throughout our ride. Who knows what crazy challenges will be thrown our way? Maybe a song that has never been performed live before? Maybe a few deep cuts that haven't been aired in ages? Maybe a couple of your toe-tapping favorites? An obscure cover? Whatever happens, it will be unique, it will be special, and it's all up to you.

"Add the cherry on top… co-headlining with IRON MAIDEN, who are a big reason that METALLICA exists in the first place. Although we haven't played together on the same day since 1988, this is the closest we've come for 25 years, and for all our fans who share the same love for IRON MAIDEN as we, the band members do, this will hopefully amount to what many rock fans would consider a dream bill.

Making this event even more special is the fact it marks 40 years of rock concerts in the legendary grounds of Knebworth House. Sonisphere 2014 marks the return to Britain of the Sonisphere festival which for the past five years has been the biggest pan-European festival, playing to audiences of over 1.5 million fans.

Says Team Sonisphere: "During our two-year absence, we've continued to believe in and work hard on Sonisphere.

"We said in 2013 that if we had the right line up then we would be back, and that's exactly what we’ve got in 2014. The omens were obviously on our side when we secured the two biggest and best metal acts of all time in the year that also brings the 40th anniversary of the first concert at Knebworth.

"Our excitement at being able to offer METALLICA and IRON MAIDEN on the same bill for the first time ever has been hard to contain. To do so in a year of great celebration for the iconic venue is very satisfying. Sonisphere 2014 is going to be a legendary year!" 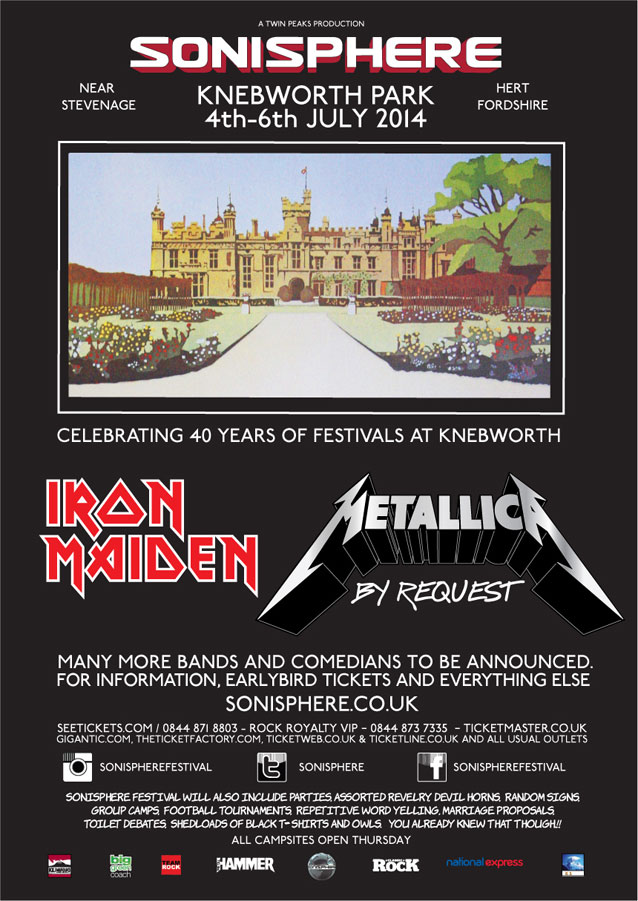