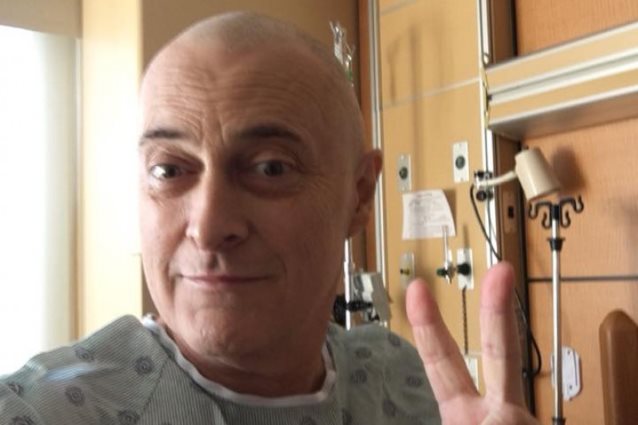 Former W.A.S.P. and current METAL CHURCH drummer Stet Howland is in remission from Diffuse large B-cell lymphoma (DLBCL), an aggressive type of non-Hodgkin lymphoma that develops from the B-cells in the lymphatic system.

Howland revealed the good news on his Facebook page, saying that results from last Friday's a positron emission tomography (PET) scan showed "no detectable cancer in my body." He added that when he received the report, "I nearly shit myself I was so happy. Needless to say, there were tears of joy here at my house."

Last October, Howland began chemotherapy treatments, with each treatment consisting of Stet checking into the hospital as an inpatient and running continuously on chemo (16-hour drips, one right after the other) for just under five full days. On his days "off," he continued to go in for blood testing and received blood transfusions every couple of days.

In his latest Facebook post, Howland said that he "lost six months of my life and every hair on my body to a dreadful disease that usually takes good people's lives. The financial doom that came with it will follow me for a while, but honestly, in my opinion, huge financial debt cannot be weighed against the value of life itself. So now I owe hundreds of thousands of dollars — big fucking deal. That's a gift when compared to the alternative."

A GoFundMe page has been created to help Stet cover the cost of his medical expenses.

Stet was named METAL CHURCH's permanent new drummer in July 2017. He stated at the time that he was "honored to be a member of such a group of people" and vowed to do his "best to deliver strong performances both live and in the studio." He added in a social media post: "I consider myself a very lucky man who has done many great things in my life. I have been blessed to play in several iconic bands in my career. But my current METAL CHURCH gig is the unrivaled pinnacle of it all."

THIS JUST IN FROM STET:

“Holy crap do I have some good news to share today!