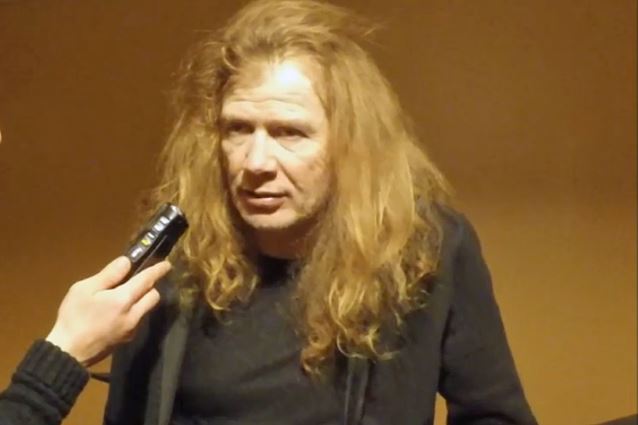 Bonfire conducted an interview with MEGADETH mainman Dave Mustaine before the band's March 20 concert at Electric Factory in Philadelphia, Pennsylvania. You can now watch the chat below. A couple of excerpts follow (transcribed by BLABBERMOUTH.NET).

On whether he feels MEGADETH "returned" to something on its latest album, "Dystopia", or it's just the next chapter in the band's evolution:

Dave: "I think it's a little bit of both. It certainly feels like this is what we've always done, but we, honestly, haven't really always been doing what we should have. You know, there's been some times where we were getting some suggestions from outside people, management, the label, so on and so forth, to try songs a certain way, and I think that when you stick to your guns, you have no one to blame. When you listen to other people telling you what to do and it doesn't work out right, you can take the chickenshit way out and blame them. But I think the bottom line is, no matter what happened with us, I was the one who made the decision, so we're in the place that we were because of me and my decisions prior to 'Dystopia'. And 'Dystopia' has taken such a huge leap for us. In four weeks, we outsold two years' worth of [2013's] 'Super Collider'. So that's been great. It's been in the Top 10 in so many nations around the world right now; it's really, really exciting. I'm trying to take it in stride, because I know that this isn't by my doing; it's by my doing and listening. Because there's been a lot of times along the way where the signs were there; you just didn't see 'em, because you were so busy trying so hard to do the right thing and you're making it harder for yourself."

On whether "suggestions from outside people" included being more "radio friendly" on an album like "Super Collider":

Dave: "Well, not just radio friendly. I think certain things… Like when we… It basically started after 'Countdown To Extinction' where the logo changed, our look changed. We were supposed to start growing facial hair, [and we were told], 'Take the points off your 'M' letters on your logo, [and] get rid of your mascot and stuff.' And we were, like, 'Really?' You've gotta remember, 'Countdown' came in at No. 2 [on the Billboard chart], so we thought, 'Wow! This feels great. Now we're starting to get some direction. This is how you'll be great. You listen to people who have some credibility.' And we did, but it didn't work. And you don't realize that people that have credibility aren't always right. So it took a little while for us to sort stuff out and for me to figure out where it was that we went off-roading, so to speak. And I think we're there right now. We're happy. Everybody's jamming. You look at the guys on stage and everybody's smiling and goofing around. The music is tighter than anything I've ever remembered us playing, but the shows are very loose, with the humor and playing with the audience and just interacting with them and stuff. And I think that's something that we've been missing a lot, because when you're playing music, sometimes you want it to last forever. Some other times, if you're not feeling really good, you wanna get through it as best as you can, but you want it to be over. So there was a lot of periods where there was internal band fighting, since when 'Youthanasia' came out in '94, where there were people that we all played together, and whether it was me or them or all of us, there were times where we just weren't really feeling the way that the four of us feel about each other right now. We get along so great. And we sit up in a bus and we joke around. [David] Ellefson [MEGADETH bassist] is sober and he's a pastor, so when it comes to us sitting in a bus and drinking and cussing at night, he's there with us — not doing it, but he's there with us. And I think that that's just one of the greatest things, because I got my best friend back and I've got a fantastic guitar player and drummer. All this great success that's taken place for us has helped me take a look at my leadership skills and what to build on and what to undo and take a different look at."

On April 8, Universal Music / Tradecraft / T-Boy Records will issue "Dystopia" as a limited-edition vinyl picture disc featuring the album's vivid dark and chilling artwork which takes the bands long-time mascot Vic Rattlehead to a whole new level and drops him into a bleak, futuristic dystopian universe.

The "Dystopia" picture disc can be ordered individually at all participating retail and online outlets or at UMv as part of a specially priced pack with other picture disc titles including "Peace Sells…But Who's Buying?", "So Far, So Good…So What!", "Rust In Peace", "Countdown To Extinction" and "Youthanasia".