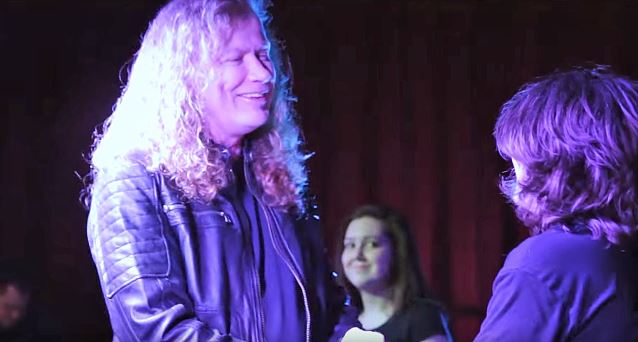 MEGADETH lead singer and guitarist Dave Mustaine visited the School Of Rock's Frisco, Texas location on February 19. Mustaine gave musical guidance to School Of Rock students, working personally with the future rock stars to help advance their musical skills. Additionally, he joined students from School Of Rock Fort Worth on stage to perform a few MEGADETH tracks, both classic and new, for the rest of the school, contest winners from the Dallas-Fort Worth community, and the students' families.

An official video recap of Mustaine's visit can be seen below.

During the question-and-answer portion of the event, Mustaine answered the following questions (see video footage below):

* What instruments do you play?
* What song did you first learn to play?
* Which bands should young musicians study?
* How is the music business different today than when you first started?
* What is your advice for kids wanting to pursue a career in music?
* To achieve what you have done and continue to achieve, what is the one thing you do to consistently to make that happen?
* What would you do differently?
* Would you recommend signing to a major record label or an independent?
* What do you do to keep your voice healthy?
* What different types of music do play and listen to?
* Are you a perfectionist and how does that affect your music?

A couple of Mustaine's answers follow below (transcribed by BLABBERMOUTH.NET).

Question: To achieve what you have done and continue to achieve, what is the one thing you do to consistently to make that happen?

Mustaine: "The one thing that I try and do consistently…. My life has changed a lot in the last… probably about twelve years. I led a very bad lifestyle, because I just didn't really have anybody to answer to; I didn't really care. So I made a lot of bad decisions — the things that I did to my body, the things that I did to my friends. I was kind of like a car with no brakes. And as I went farther along in my career, I started to realize that you need to take care of yourself. Those things that you put into your body, the way that you feed yourself, the sleep that you get, the practice that you do… If you practice too much, it's just as bad as not practicing enough. And I think the most important thing is that you have a really important… It's your decision — this is not me telling you to do this, but, for me, my relationship with God was the difference between being able to go out into battle on tour and be away from my family for as long as I am. So that may not be what you need — you may not believe like I believe — but I believe that everybody has to have something that they believe in that helps them get through the day, and for me it's Jesus."

Question: How is the music business different today than when you first started?

Mustaine: "The music industry has changed a lot. You guys… It's all about cellphones, it's all about digital downloads, stuff like that. And when we started, it's, like, vinyl, 8-tracks, cassettes, tapes… And that's something that, when you record, there's a difference between digital and analog sound; analog's a lot warmer, digital's a lot clearer. So that's one thing that's happened in the recording process. As far as the sales process, it's totally different, because record sales are almost invisible anymore. People, they will download your music for free and they expect you to give it to them; it's like a promotional thing. When I first started, record sales were really a big part of your band, part of your career. Now it's kind of like a calling card. MY first couple of records I put out had eight songs on them. This last record we put out had fifteen on it. That's terrible; that's two records we have to put out. And in territories like Japan… I love our Japanese fans, but we have to give them an extra song, because the domestic release in Japan… The record label there will put out the record, and the Japanese fans have a desire to have cool stuff from America, so they don't wanna buy the domestic album; they'll buy the international album. So in order for them to buy the domestic album, the Japanese release, they need something special, so you have to give them an extra song. And what ends up happening is you start writing records where you're making songs that you can give to people. Making a record that has fifteen great songs on it from one end to the other is very hard. So when you look at the music business nowadays, it's totally different."

Question: Are you a perfectionist and how does that affect your music?

Mustaine: "I'm a Virgo, so Virgos are perfectionists. If you ask any of the guys that have gotten fired or quit, they'll tell you that I'm a perfectionist. And I think that's good. In order to be a leader, you need to be willing to lead. The tip of the spear is sharp for a reason. And when things go wrong, I'm the guy that gets blamed. When things go great, everybody takes the credit. I have big, strong shoulders and I can take the blame. And I have a very big heart and I can share the accolades that come along with things when we get successful. And I think that's what makes a good leader — being able to share the good times with everybody, because we all wanna be loved, we all wanna be successful, and we all wanna be appreciated. And then when somebody's getting beat up, something's wrong, me getting in between. And I remember Phil [Anselmo] from PANTERA wanted to beat up Nick Menza, our singer [sic], and I have three black belts, and Phil doesn't scare me, so I got in between him and Nick, and said, 'You're not gonna touch Nick.' And that's what sometimes you have to do as a leader; you have to be the one that puts your height on the line."

School Of Rock continues to be an innovator in the musical education industry. The program takes students beyond the classroom and to some of rock 'n' roll's most famous stages, such as Chicago's House Of Blues and Lollapalooza. School Of Rock used this event to celebrate the opening of School Of Rock Plano, its ninth Dallas-Fort Worth area location.