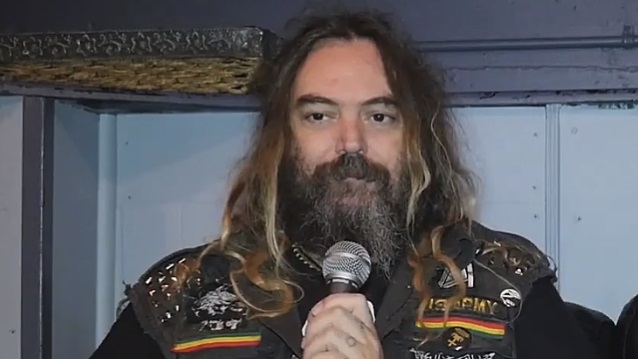 Max Cavalera spoke with Heavy New York prior to SOULFLY's October 22 performance at New York City's Gramercy Theatre, the fifth show of a tour in which the group performs NAILBOMB's 1994 album "Point Blank" in its entirety. The full chat can be seen below. A few excerpts follow (as transcribed by BLABBERMOUTH.NET):

On how the idea for the tour came about:

Max: "'Return To Roots' [the ongoing tour in which he and his brother, Igor, perform SEPULTURA's 1996 album 'Roots' in its entirety] was such a successful tour, and it was so exciting that we thought, 'Maybe we could do something else similar but with a bit of a different twist.' Then we came up with this idea to do SOULFLY playing 'Point Blank', which is cool because it has the weight of a power band like SOULFLY playing a great record, one of my favorite records I've ever done."

On why he chose to perform "Point Blank" over records such as "Chaos A.D." and "Arise":

Max: "'Point Blank' was something I wanted to do for a long time. We came close to it when we did the SEPULTURA / FUDGE TUNNEL / FEAR FACTORY tour [in 1994]. When we played Canada, I think one night we played five NAILBOMB songs, so it was a mini-NAILBOMB show. People always ask me, 'Are you going to do another NAILBOMB record?' and 'Are you ever going to play that record live?' We're not going to make a new record, because Alex [Newport] is done with it. But, this tour came, and it was a great idea. It's cool timing, too, because right now I'm just waiting for the CAVALERA [CONSPIRACY] record to come out. So it's perfect timing for me to go on the road and do 'Point Blank'."

On what's next for SOULFLY:

Max: "I'm going to work on a new SOULFLY [album] next year. It's twenty years [since] the first record. The next SOULFLY is cool. We're going to bring a lot of the tribal stuff back. It's going to be full of, like, ritual stuff, spiritual stuff, tribal stuff, and heavy stuff."

Max can next be heard on the new record by CAVALERA CONSPIRACY, "Psychosis", due November 17 via Napalm Records. The album, which was produced by longtime friend Arthur Rizk, was recorded primarily at a studio in Phoenix, Arizona.

The following week, Max and Igor will kick off the final leg of the "Return To Roots" tour in Europe, starting on November 26 in Utrecht, Netherlands and concluding on December 12 in London, England.