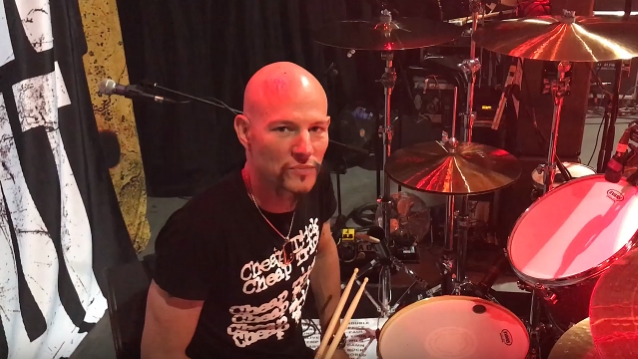 Speaking to Rock Titan, Starr stated about how his involvement in the project came about (see video below): "Three weeks ago or four weeks ago, Jeff reached out and said, 'hey, I've got this new thing with Robin McAuley and Reb Beach, and I wanted to see if you'd be interested in talking about playing drums.' And I said, 'Yeah. Of course.' I know all those guys — [they're] super talented. They have a record, and the record was done and they needed to put some drums on it. So they had asked me, and I checked out the music and it was very cool. I said yes, and then, three days later, I was up at Jeff's place and we were cutting drum tracks. We spent four days, three and a half days recording 12 songs. And it's awesome. And I just, two days ago, got the last of the rough mixes. Jeff is putting together everything. And on some of the things I was hearing Robin's vocals — most of it I was — but I didn't hear the whole thing. And it's really, really, really good. Everybody says that about whatever they're working on, but we were all, like, 'Holy shit! This is awesome.'"

Starr declined to reveal the new band's name, but said the record should be available in the coming months. "I think they're shooting for later this year to get it out, but that's not any kind of official word," he said. "But I think that's the goal. And then what happens from there we'll see. Everyone's got schedules and all that stuff, so we've gotta see what happens."

The drummer, who has played with a number of high-profile acts in the past, said that he is an official member of the new project, "which is great. And I think that's kind of the first time for me, because I'm always coming into situations where I'm the hired guy," he said. "And look, there's advantages to that too — you negotiate your rate and then the tour can do whatever it does and you don't have to worry about it. So there's pluses and minuses to all that. But, yeah, I'm a member of this band. And I think everybody's pretty excited to get out there and play. Just how and when we can do that, we'll have to wait and see."

Last month, Pilson officially confirmed the project's existence, saying that the album was "turning out amazing. Wait until you hear everybody's playing and singing. It's beyond — way beyond," he promised.

Pilson recently told Peter Harris of the "10?" podcast that he was working with Beach and McAuley. "I just did a project with Reb Beach and Robin McAuley on vocals," he said. "There's a song on the record that I wrote right after seeing the QUEEN movie ['Bohemian Rhapsody']. I came home and I sat down at the grand piano and pretty much wrote exactly the chorus that we have, just coming straight [from] the movie. It is a bit QUEEN-like."

Pilson — one-fourth of the classic DOKKEN lineup — joined FOREIGNER in 2004. In recent years, he has also produced albums by LAST IN LINE, KILL DEVIL HILL, STARSHIP and WARRANT.

Beach — who was among the artists recently interviewed for Guitar World's February cover story on the "last days of hair metal" — is an original member of WINGER. He joined WHITESNAKE in 2002. Notably, he also performed on one DOKKEN album alongside Pilson, 1999's "Erase The Slate".

Irish vocalist McAuley is best-known for fronting MCAULEY SCHENKER GROUP from 1986 to 1993. Alongside Graham Bonnet and Gary Barden, he has toured with MICHAEL SCHENKER FEST in recent years and also appears on "Resurrection", the group's 2018 album.

Starr — who joined Ace Frehley's band in 2012 and continues to perform with him periodically — began touring with MR. BIG in 2014 and appears on the group's latest album, 2017's "Defying Gravity". He has also toured and/or recorded with HOOKERS & BLOW, BEAUTIFUL CREATURES and BURNING RAIN, among others.