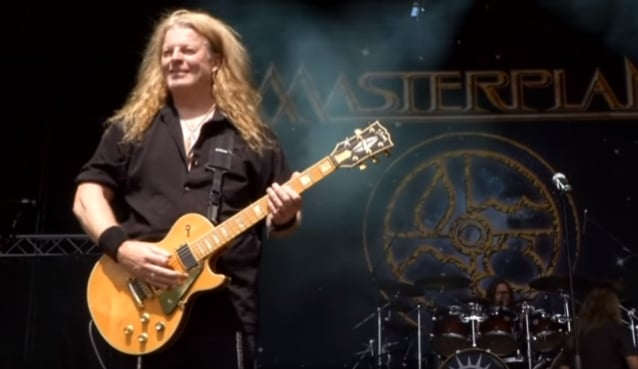 Brazil's Rock Mania recently conducted an interview with guitarist Roland Grapow of melodic metallers MASTERPLAN. You can listen to the entire chat below. A few excerpts follow (transcribed by BLABBERMOUTH.NET).

On "PumpKings", MASTERPLAN's 2017 album that saw the band re-record the songs Grapow wrote while he was a member of HELLOWEEN:

Roland: "I think it was quite nice in a way. Of course, it's always controversial opinions from fans, especially the diehard HELLOWEEN fans asking why we did it or we recorded it. Or, 'Roland, why are you recording songs from HELLOWEEN?' Blah, blah, blah. I just re-recorded songs of myself, my own songwriting. Even some were from [Grapow's pre-HELLOWEEN band] RAMPAGE, like ten years before I joined HELLOWEEN. For me, it was kind of a feeling thing. It was nothing serious or deep or revenge — that had nothing to do with it. It was to bring my babies back to their daddy. We sometimes play two songs from this album, like 'The Chance', for many years, like four or five years. Last year, we brought 'The Time Of The Oath' into the set, which is cool, it's kind of fun."

On how he tried to make "PumKings" stand out on a production level:

Roland: "It's hard to say. I think it's just a different kind of feeling. I think everything I liked in HELLOWEEN, the old productions, some of the production I didn't like so much because it was not perfect for my taste compared to other bands in that time, let's say in '93, when we recorded 'Music' [from the HELLOWEEN album 'Chameleon'] or something. I think other bands sounded a bit more stronger, like from different producers, different studios or wherever. But I think I like 'Music' still, which is maybe not the typical metal song at all. It's kind of my youth songwriting, when I was 19, I think I wrote it for RAMPAGE. I think this is still one of the songs which I like a lot because it has a lot of feelings. It's more or less a blues rock song, not a metal song, but I still like the opposite as well, like 'Escalation [666]' or 'The Dark Ride'. I still love it. I like it. It was the new, updated [style], even though it wasn't a drastic difference in sound. 'The Dark Ride' album sounded pretty good already."

Roland: In the old days when bands played in the studio, they could play really live together. I remember when we did the recording for the first albums with HELLOWEEN, we were a band together with a drummer playing along and nowadays, everybody's jut playing separately in the studio which is totally a different feeling. Most of the musicians don't know the parts in the studio. They're not learning all the stuff. They're a bit more lazy. Everybody's used to playing to the computer and doing part by part. Sometimes I'm the same, to be honest, as a guitar player. In the end, everything sounds great, but the progress was totally different 20, 30 years ago. Everybody knew exactly what to do. Everybody knew his solo part. Everybody knew his vocal parts. Nowadays, everybody's doing it like a puzzle and the producer, like me, I have to put everything together and in the end it sounds great. On the other side, the band is thinking they don't play well, but the producer will make it nice. [Laughs] It's like 'Why are we not sounding like METALLICA?' 'Because you're not playing like METALLICA. That's maybe the difference.' In general, I try to help every band. It doesn't matter what kind of level they are. That's my job."

On his career in music:

Roland: "There are many, many important memories I have or points. I think still, when I joined HELLOWEEN was one important event. Without this, I think I wouldn't be in the business. I think I would have had a totally different life without this. It was a really big challenge for me to join the band. Going further, even leaving HELLOWEEN was a good part, maybe not for the fans, but for some people in the band. [Laughs] I'm still happy to be in the business with my studio business or with MASTERPLAN. People still are writing me about the HELLOWEEN years. This gives you good feelings. I'm really proud about it, to be honest."

On how the music industry has changed:

Roland: "It's a big difference. I remember when I joined HELLOWEEN, it was the end of the '80s. That was the perfect time of sales, selling albums. A lot of people came to the shows. Everything changed drastically. The music business is really not so easy anymore. I think only the big bands doing good business, like METALLICA, the HELLOWEEN reunion, IRON MAIDEN, KISS, SCORPIONS, they all are doing great business, but many of the normal-level bands… it's hard to say. They struggle. They struggle a lot. I think for young bands, it's not easy anymore because everybody's downloading and this kind of business. But you see a lot of young bands have the dream to make it. Some are doing it. They're not young anymore, but look at SABATON or AMON AMARTH, all these bands doing amazing business. They can survive. They have a lot of people coming to shows, like NIGHTWISH. They're not young, but they're really big. There's a lot of bands doing big business and many bands doing [not as well]. It's hard for them to survive. In the '80s, every band was kind of good in the moment of sales. There was a lot of people who could live from the sales of the albums and merchandise and touring. Nowadays, there's the big ones, like ten percent. The rest is like 'Wow, this is not so easy.'"

Grapow joined HELLOWEEN in early 1989 as the replacement for founding guitarist Kai Hansen. Grapow was originally discovered in a Hamburg, Germany club playing with his band RAMPAGE by HELLOWEEN guitarist Michael Weikath, who kept Grapow's name in mind in the event Hansen left HELLOWEEN. Grapow proceeded to complete the touring cycle for the band's classic 1988 "Keeper Of The Seven Keys Part II" album.

Grapow and drummer Uli Kusch were dismissed from HELLOWEEN in 2001 because of disagreements over the direction of the band's "The Dark Ride" album, which saw an increased focus on darker and modern metal elements. Grapow and Kusch formed MASTERPLAN a year later, securing the services of Norwegian vocalist Jørn Lande.