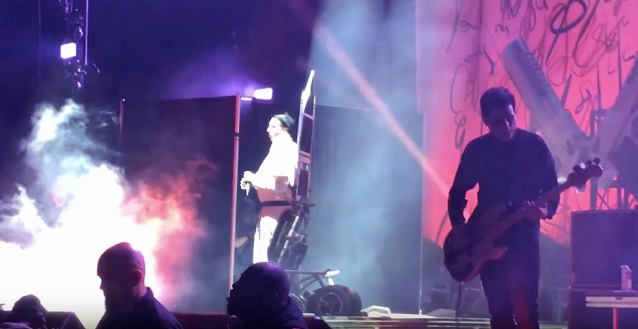 Alderete, who gained recognition in the '80s as a member of RACER X, made his live debut with Manson on November 5 at Ozzfest Meets Knotfest in Devore, California.

Manson fired White late last month after the musician was publicly accused of rape by his former girlfriend, Jessicka Addams of the riot grrrl band JACK OFF JILL.

White later responded to the accusations, saying that he did "not condone non-consensual sex of any kind." He added that he would be "taking some time" to spend with his family and focus on maintaining his several years of sobriety.

In her Facebook post, Addams described White's allegedly violent and jealous behavior, claiming that he would hit her and that he once slashed the tires of her car after she gave a male friend a ride home. Toward the end of her statement, Addams described an encounter in which White allegedly raped her at their former apartment while he was on a break from touring with NINE INCH NAILS.

Although she alluded to White's behavior in a 2015 interview, she said she finally opened up now in solidarity with other women who are coming forward with stories of sexual harassment and abuse in the wake of the many allegations made against film producer Harvey Weinstein.