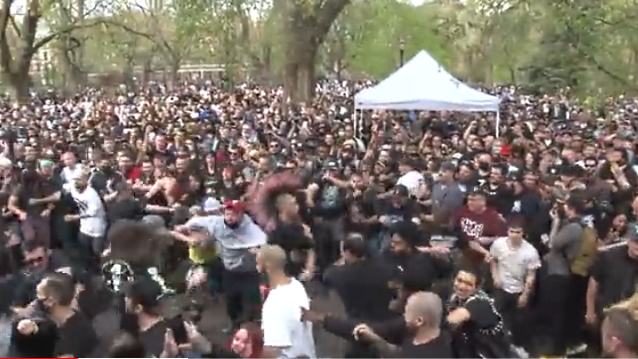 After 14 months in lockdown, hardcore shows have officially returned to Tompkins Square Park in New York City. MADBALL headlined a concert at the East Village outdoor venue on Saturday (April 24), with support from MURPHY'S LAW, BLOODCLOT (former CRO-MAGS frontman John Joseph) and THE CAPTURERS. Donations were being accepted at the all-ages, daytime event, with a portion of the proceeds benefiting the New York Firefighters Burn Center Foundation.

Last month, New York Gov. Andrew Cuomo announced that beginning April 2, live performance venues in the state would be able to open indoor spaces at 33 percent capacity or up to 100 people indoors and 200 people outdoors. If all attendees present proof of a negative coronavirus test prior to entry, capacity can increase to 150 people indoors and 500 people outdoors, according to the state.

Earlier today, Joseph took to his Facebook to push back against the criticism over the fact that the crowds at yesterday's concert did not appear to be adhering to social distancing guidelines and were not wearing face masks. He wrote: "Yesterday in Tompkins Square Park well over 2000 peeps came out. Free show for the People by the People. It was a blast! We raised $ for the FDNY Burn Unit, and fed people organic plant based eats.

"And let me say this - to all those talking shit. For the last year in NYC there were protests - tens and thousands of people in the streets - some rioting and looting engaging in bias attacks - on 4/20 weed day - thousands filled Washington Square Park - sharing blunts and weed pipes. Nobody said shit. This was our PROTEST - OUR RALLY. People who didn't want to come - stayed away. Good - nobody missed their ass.

"Wanna thank Cousin Joe and The Black-n-Blue crew for doing an amazing job. All the bands killed it THE CAPTURES, WISDOM AND CHAINS, MURPHY'S LAW, and the KINGS of NYHC MADBALL. PMA was had - smiling faces everywhere - we all needed this! I hope other cities do the same."

An hour later, Joseph also tweeted: "We had close to 3000 people at the show yesterday in Tompkins Square Park - Everyone had a great time - thank you to all the bands that played and thanks to all those who came out I live streamed it for those who couldn't make it".

MADBALL's latest album, "For The Cause", was released in June 2018 via Nuclear Blast. The follow-up to 2014's "Hardcore Lives" was co-produced by Tim Armstrong (RANCID), who also makes a guest appearance on the song "The Fog". It was mixed and mastered by renowned producer Tue Madsen (MESHUGGAH, THE HAUNTED, SICK OF IT ALL) at Antfarm Studios in Denmark.

After the release of the 2017 album "Up In Arms", BLOODCLOT went on hiatus while grieving the loss of its guitarist and dear friend Todd Youth.

A new BLOODCLOT full-length album is scheduled for release later this year.

Yes initially I was told 2000 peeps then someone counting bodies said 3000 in the park - amazing day https://t.co/5bQsv3p3v0

Yesterday in Tompkins Square Park well over 2000 peeps came out. Free show for the People by the People. It was a blast!...

Yesterday, in NYC, both Washington Square and Tompkins Square parks were packed with people for live music - and the photos have everyone pretty much shoulder to shoulder with very few masks in sight. So that should be good for a spike in the virus in about two weeks.

This screenshot is from one of several videos on youtube showing the all day concert in Tompkins Square Park TODAY @NYCHealthCommr @NY1 @nypost @DailyMail thousands of people screaming, dancing, moshpit chaos, stage diving almost all the people with no masks, any concerns? pic.twitter.com/KyTh2FDkTb