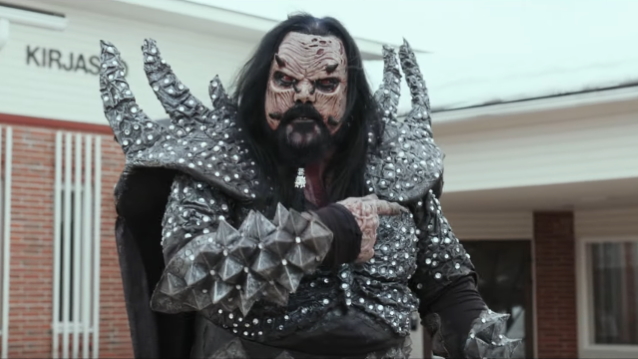 According to YLE, LORDI leader Mr. Lordi received his second dose of the COVID-19 vaccine on Sunday (August 1) at a "pop-up" vaccination event in his hometown of Rovaniemi, Finland. Rovaniemi is the capital of Lapland, and is known for being the "official" home town of Santa Claus, who also made an appearance at the event.

"They put a big needle in my arm, and that's exactly why I came here. This was my second vaccine dose," Mr. Lordi said.

The 47-year-old singer also lamented the number of tours that have had to be postponed because of the coronavirus pandemic. But he said that he hasn't let the downtime from the road go to waste.

"There's also good sides to all of this. It's given us an opportunity to be creative. We've recorded seven albums [during the epidemic]," he said.

As of July 23, a total of 102,042 positive test results had been recorded in Finland, a country with a population of 5.5 million. Just under a thousand people died as a result of the pandemic.

As Mr. Lordi suggested, LORDI will release no less than seven new studio albums in October. The LPs will mark the first new music from LORDI since the arrival of 2020's "Killection", a fictional compilation album which contained songs that LORDI would have written had the band existed between the early 1970s and the mid-1990s.

Mr. Lordi previously explained how all the new music came about: "Within a week when the 'Killectour' was cut short in March 2020, I realized we're gonna have to use the sudden extra time somehow. It was clear that it is the time to start planning the new album, even though 'Killection' was released not even two months before. I was thinking that the most boring thing we could do after 'Killection' is to do another basic LORDI album. And I was very much enjoying the different styles of songwriting, recording and production on 'Killection', but another boring idea would have been to do a part 2. Since 'Killection' is a fictional compilation album from a fictional back catalogue that doesn't exist, I got the idea that the only thing that could top that is to record and release that fictional back catalogue. And until Halloween 2021 the fictional back catalogue will be no longer fictional, it actually will exist... at least for the most part. My original idea was to release 10 albums, but the label said that is insane. But seven is a number they felt that is somewhat sane, hahahaha!"

LORDI won the Eurovision Song Contest in 2006 with the song "Hard Rock Hallelujah" and remains the first and only winner from Finland in the history of the competition. Since then, the band has gone through several lineup changes. The original members who are still active with the band are Mr. Lordi and guitarist Amen.