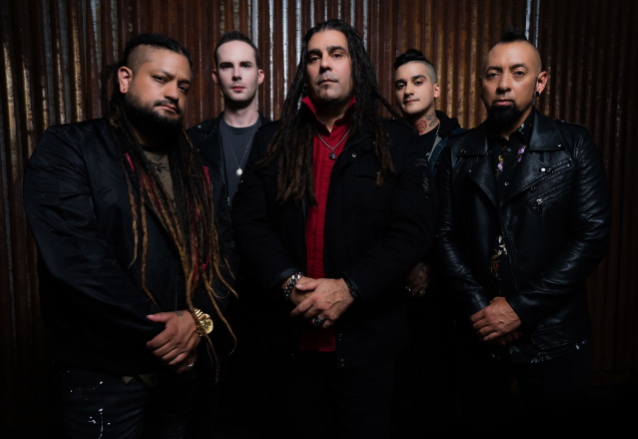 "Scapegoat" and previously released single "Not Even Human" are expected to appear on LIONS AT THE GATE's upcoming debut album, which was produced by FAILURE ANTHEM's Kile Odell, who has previously worked with FOZZY and MOTIONLESS IN WHITE.

Machado states: "'Scapegoat' was a song brought in by Ahrue. Everyone liked the song immediately, including our producer Kile Odell. The instrumental had a chilling and beautiful metallic melody. I was quickly moved by the music and began to wonder about my own life. From there, we began to sculpt a message.

"Dysfunctional people don't want to apologize or make amends; they want to resolve what's broken in them by damaging others. It's their great misconception that the scapegoat will be weak and remain powerless when it takes great strength to carry a burden you bear no guilt in.

"Kile and I realized early on that I was going through a very challenging time in my life with no outlet other than the music and that perhaps this was what I needed to begin healing. A lot of painful memories were dug up and dealt with whilst recording. I am grateful the guys had the patience to help me work through it, and that music is still in my life. Hopefully these songs can speak to other like-minded people and offer a sense of healing.

"The video for scapegoat is a performance art video. The band individually portrayed personal emotion as part of the art. Vicente Cordero's approach allowed us to feel comfortable in an environment where the performance and the emotion is the focus."

LIONS AT THE GATE released its debut single, "Not Even Human", back in June to huge excitement from fans old and new. To date, the track has clocked up 125,000 streams and nearly 100,000 YouTube views.

When LIONS AT THE GATE's formation was first announced in early June, Machado said: "I feel so blessed to be in LIONS AT THE GATE. We've all been making albums for a long time but I think it was time for us to make something special and memorable again. This album is exactly that. Take away our musical history, take away our long hair, take away our personal feelings, just make believe we were never there. This LIONS AT THE GATE album is amazing. We finally made a modern metal album that metalheads will enjoy beginning to end. It's deep, it's memorable, I can't wait for everyone to hear it, I can't wait for everyone to hear the featured female artist on one of the songs."

Verduzco added: "I'm beyond proud and excited to announce our new band LIONS AT THE GATE. Life is all about change and I feel that this music is the most dynamic and honest that we've ever written. I feel a sense of freedom and am completely reinvigorated and even anxious (in a good way) to be a part of something that pulls influence from so many directions . Each member brings a unique set of talent and tools. It's quite frankly some of the best music we've ever written. Organic, honest, and true."

Luster stated: "I'm more excited about LIONS AT THE GATE than anything that I've been a part of since I started my musical career."

Luster discussed his renewed collaboration with Machado and Verduzco in an interview with Pierre Gutierrez of Rock Talks. He said: "I can't even explain how happy I am with how this came out. It sounds, in my opinion, better than anything that Cristian and I have ever done together, and that includes all the ILL NIÑO records that we've done together."

Asked about the musical direction of LIONS AT THE GATE, Ahrue said: "It's a very polished sound, similar to… I don't wanna say it sounds like [ILL NIÑO's 2003 album] 'Confession', but there's a lot of singing on it, there's a lot of production. But at the same time, there's heaviness to it. But the songs are better than anything we've written. And the crazy thing was the process of writing 'em was way easier than it has ever been for us. Usually an ILL NIÑO record would take us three to six months to finish. We finished this record in 20 days, and we believe it sounds better than anything we've ever done in the past."

Speaking about LIONS AT THE GATE's collaboration with Odell, Ahrue said: "He's worked with BAD WOLVES. I think he may have co-wrote with them. But he has a huge resume, and he's had, like, five Number One hits last year. And he was amazing to work with. I've worked with Ross Robinson, I've worked with Johnny K, I've worked with Terry Date, as a mixer, and I've worked with some other big names in the industry that have all had platinum records, and I'll say, hands down, Kile Odell is amazing. I would say, second to [MACHINE HEAD's] 'The Burning Red', it was an amazing experience. It was a different way. As far as Ross Robinson was really into the emotion and getting the emotion out of the players and the music, Odell is very musical and he's really able to help with the songs, and he has a great ear and a great vision."