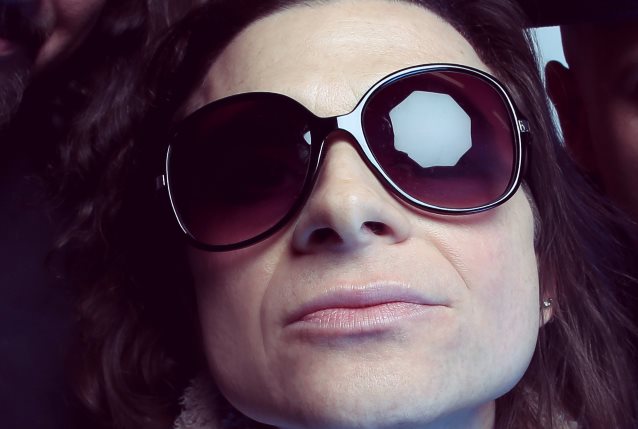 In a candid new interview with music writer Joel Gausten, LIFE OF AGONY singer Mina Caputo (formerly known as Keith Caputo), who came out as transgender in 2011, discusses a variety of topics, including the band's new album ("A Place Where There's No Pain"), drug use and her perspectives as a male-to-female transgender person. An excerpt from the chat appear below.

Joel Gausten: How would you say society's ability to embrace the transgender reality has evolved over the years?

Mina: "When I was growing up, Atari was our Mac. I grew up in a very different time. I already knew that we had this umbrella title called 'transgender woman' or 'transsexual' or whatever you want to call us... We're a different kind of human being, and there aren't just two [genders]; it's just part of the farce of the institutions that are set in place for humanity to think. There's tons of different kinds of human life on the planet, just like there's hundreds of thousands of plant species. Just like there's hundreds of thousands of amphibian, reptilian and bird species and mammals. Human beings aren't just male and female; it doesn't work like that. You need to fuckin' open your mind. And I do think as time evolves, more and more people really don't care. Everyone's got their own story. I think everyone puts too much emphasis on what everyone else is thinking rather than what they should be thinking and making their own personal changes. Change starts from within; change starts from inside your own self. I wanted to see more people like me walking the planet, so what did I do ten years ago? I had to come out, because it got to a half-hearted suicidal point where I was doing crazy fuckin' drugs — heroin, coke — for weekends and weeks at a time, hoping to die at twenty-five because I couldn't bear to live as a man because I knew I wasn't. The soul, the consciousness — it's alive; it's big, even though science, the church and religion try to deny this stuff. All these institutions fighting against nature. That's what they're all designed to do — take your own nature away from you. But I do believe that progress is being made; we're definitely in a safer environment than when I was growing up in the late '70s and early '80s. I couldn't have come out; my grandfather would have put a bullet in my fucking head. My grandmother knew, but we couldn't tell the family because my grandfather would have literally murdered me. He was a racist, he was homophobic and he was transphobic — he fucking hated himself. He beat the shit out of me and his wife my entire childhood — in fact, I never even had a fucking childhood. It was mothering my junkie father my entire fucking life. I always had that motherly instinct, hence why my wings needed to spread.

"I think progress definitely has been made, but there's still a lot of work to be done. I still think a lot of people are not afraid of people like me; what they're really afraid of are their private selves. They can't look at themselves in the mirror — they can't enjoy themselves, they can't enjoy their bodies, they can't enjoy their sex, they can't enjoy anything about themselves. They try every fucking minute to not look in the mirror... Transsexuals, gay people — we're the most creative, open, empowered, giving, sentimental, loving and compassionate people on the fucking planet. But then you've got all these other motherfuckers who are running the fuckin' planet trying to make rules, regulations and laws on why and how you shouldn't be transsexual or gay — or you shouldn't do this or shouldn't do that. They're telling you, 'No, no, no, no, no!' but meanwhile all these politicians and priests are all getting their hands dirty with little children and child trafficking and pedophilia. The world's run by quote-unquote 'f****ts' and transsexuals, okay? That's the big fucking thing — the jig is up. Everyone needs to wake the fuck up."

Joel Gausten: I appreciate you sharing that.

Mina: "Well, it's my truth. It's how I perceive my world. But there are seven billion people out there with seven billion fucking realities, you know? Also too, hon, listen… Not one neurologist brain doctor or fucking scholar — I don't give a fuck if you have the heart, mind and scholarship of the Dalai Lama, nobody could map out, or precisely or sentimentally just explain neurologically what goes on in our biochemistry for a genetic female to change her gender into a male and vice versa. Isn't it funny how male-to-females are sensationalized in our Western culture and how female-to-male transsexuals or transgender men aren't even talked about in the fuckin' news at all? Everyone's obsessed with the penis, okay? Everyone's obsessed with the phallus. Bombs are made in the shapes of penises. That's what we're dealing with — penis fucking envy from politically ignorant, fuckin' fear-based, power-hungry megalomaniac fucking monsters that are fucking running this planet into oblivion, basically. No one could explain the chaos of nature; let me put it to you that way. There are many fish [and] there are many insects and plant species that go from male to female to female to male later on in their lives. The clownfish does it; the male seahorse fertilizes himself and takes care of the young. If that's not an homage to femininity and nature, I don't know what is. Again, there are institutions designed to take the human being away from its own nature — especially religion, the fucking institution that claims love. Mankind's been searching for this idea of God, but it's all bullshit; it's just another candy store, and people can't see through the candy that they're selling."

The complete interview is available at JoelGausten.com.