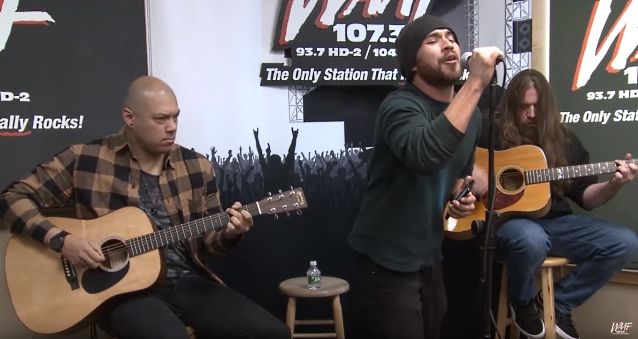 Video footage of LAMB OF GOD guitarist Mark Morton performing an acoustic version of his song "Reveal" at the studios of Boston's WAAF radio station can be seen below. Joining Morton for the performance were two members of his solo touring band, vocalist Mark Morales (SONS OF TEXAS) and guitarist Doc Coyle (BAD WOLVES, ex-GOD FORBID).

Morton tour in support of his debut solo album, "Anesthetic", kicked off on March 13 in Richmond, Virginia and concluded on March 23 in Phoenix, Arizona.

Also backing Morton on the trek were bassist Nick Villarreal (SONS OF TEXAS) and drummer Art Cruz (PRONG, Cruz and Coyle have both played with LAMB OF GOD in the past. Cruz filled in for LAMB OF GOD drummer Chris Adler on tour last year while Chris recovered from a motorcycle accident, and Coyle subbed for Morton when LAMB OF GOD opened for METALLICA in 2009.

"Anesthetic" was released on March 1. The first single from the album, "Cross Off", features late LINKIN PARK singer Chester Bennington.