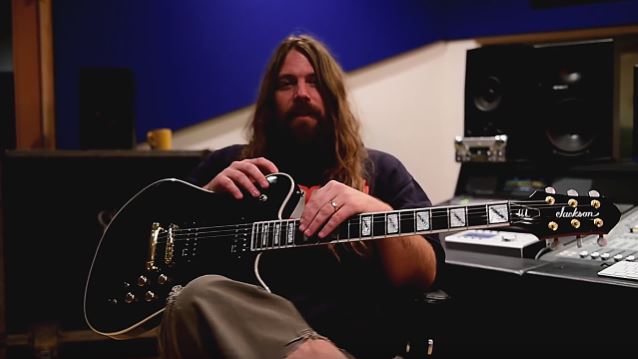 "We don't really have a name for it yet, and we've put just a couple of tunes out on the Internet and got a phenomenal response; people really seem to dig it, which is exciting, because we do as well," Mark said (hear audio below).

"Genre-wise and music-wise, it's very, very different than LAMB OF GOD," he continued. "It's kind of exciting for me, creatively, to be able to reach out and mess around a little bit more with that blues element that I like so much and a little bit of a fusion side to it all as well."

According to Mark, his new project "doesn't really in any way conflict with what LAMB's doing. In fact, I'm not sure that it'll translate necessarily to all of our fans, but I have had a great response so far."

Regarding how his collaboration with Gaster came about, Morton said: "I've known him for years, between CLUTCH and LAMB OF GOD playing shows together and that kind of thing. We did a tour years ago — about ten years ago — called 'Sounds Of The Underground', and they were on it, and that was the first time I actually ever jammed with J.P. And we literally set up in the parking lot behind where the gig was and a bunch of people were just taking turns jamming, and that's the first time I actually ever played with him. And he's just an unbelievable, good drummer, so I knew then that I'd love to jam with the guy. And we live close by — CLUTCH is from the Maryland area, and we're just next door in Virginia — so it wasn't unrealistic for us to talk about getting together and making some music."

Two songs from the Morton / Gaster project — "Love Heals" and "SnowBound" — can be streamed below.