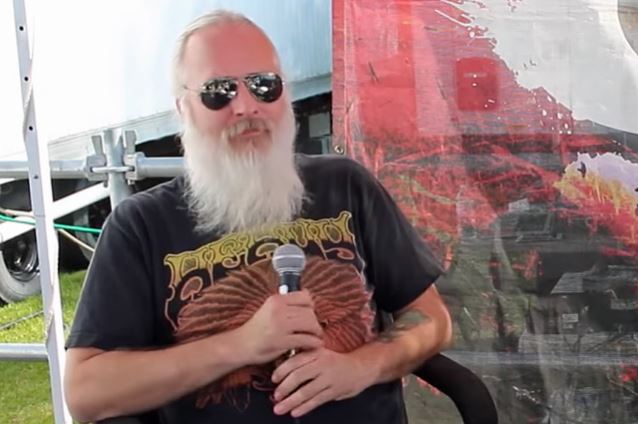 Tigman of the Q103 radio station conducted an interview with bassist John Campbell of Richmond, Virginia metallers LAMB OF GOD at the inaugural Rock'N Derby festival, which was held May 20-22 at the Schaghticoke Fairgrounds in Schaghticoke, New York. You can now watch the chat below.

Speaking about LAMB OF GOD's status as one of the forerunners of the New Wave Of American Heavy Metal movement, Campbell said: "Well, from my perspective, what happened was we started this band to drink beer and go play people's basements, and somehow that started to escalate. And these other bands were doing the same sort of thing. And we all kind of came up together, and all of a sudden they had a label for us as a way to, I guess, write about. I'm just flattered that people paid any attention to what we were doing. But the New Wave Of American Heavy Metal was not something that we strove for or came up with, or in any way, shape or form did anything other than go out and play shows and did what we did. And that was it."

LAMB OF GOD's third album, "Ashes Of The Wake", which came out in 2004 via Epic, was officially certified gold in February by the RIAA (Recording Industry Association of America) for sales in excess of a 500,000 copies.