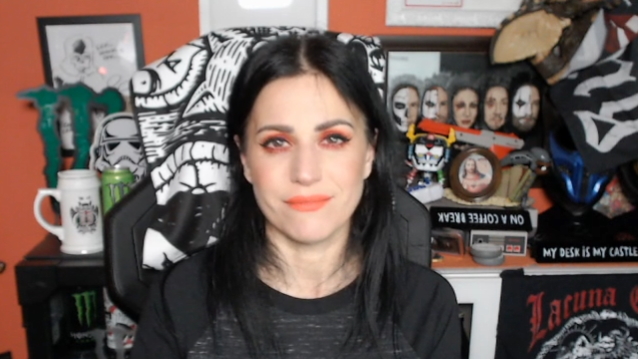 LACUNA COIL's Cristina Scabbia has decried all the negative things about social media, saying that far too many people find themselves engulfed in their smartphones, thereby creating a surge of depression and anxiety.

The Italian singer, who will celebrate her 49th birthday in June, addressed the topic during an April 9 Twitch chat with her followers. She said (as transcribed by BLABBERMOUTH.NET): "I really feel that socials, if they're not used the proper way, are extremely dangerous, because creating the illusion that everything's perfect can create problems for a lot of people that are not feeling that they fit or that they will ever be as good as these people. So always remember that usually on social media, you're always trying to stretch everything to kind of look good. And I get it. I do the same thing myself. If I take 10 selfies, of course I will pick up the best one. I'm not gonna pick up the worst one… And you guys know that you do the same. 'Cause you're trying to look nice. I'm not gonna say that you're doing it for getting approval, but it is human, 'cause we all like to be liked. But it is okay to be liked and to want to be liked, but it is not okay when you're not feeling that you're not good enough, that you're not worthy, because you're comparing yourself to others. And trust me, it happened to me as well. How many times I thought that I wasn't tall enough or skinny enough or maybe not good enough in singing or in drawing or, like, 'Oh, my God. I'm gonna stream video games [on Twitch], and what if I die. What people will think of me — that I'm not a good player.' I had moments like this. And moments like this happen, I just sit down and tell myself that there's no one — no one; that means no one else in the world — that is just like me. And just this thought should make me feel amazing, because I am unique. I am something extremely precious and special. And the same [goes] for each one of you guys. You guys have something special that no one else in the world has. Whether it's your talent, your intelligence, you're funnier than other people, you can be talented in something that other people can't do. But each one of us has something great to offer. But way too many times we forget this, because we just stay to the surface and we never go deeper. Because this is the moment where everybody just to show the surface.'

She continued: "Just keep that in mind that on Instagram, good pictures are good pictures to look at. But let's just remember that this is not reality. Let's remember that behind the beautiful picture of a beautiful model that everybody thinks is absolutely hot, maybe a few seconds after taking this picture, maybe this girl is crying her heart out because she's feeling ugly, or maybe she broke up with a boyfriend but she will never tell you. Every time you see amazing abs and beautiful bodies of guys that are just, like, 'Oh, my God. I wish I was him,' just remember that maybe this guy is absolutely insecure. Maybe this guy can't even talk to another person or enter in a relationship because he's just feeling so insecure. Or maybe he's just a person that is not nice to talk to. So keep in mind that it is not reality. Just that. Try to look at it, but with the eyes of, like, 'Oh, this is a beautiful picture. Oh, this is a beautiful video. But this is not reality because I am not in this person's shoes. I don't know what they do. I don't know what they did. I don't know where they live. I don't know if they like their life or not.' So let's try to focus on our life, because if we waste too much time looking at other people's lives, we are missing something in ours. We are missing the chance to build something that will be good for ourselves. We are missing the time to connect with other people that will enrich our existence."

Two months ago, LACUNA COIL took part in an initiative dubbed "L'Ultimo Concerto?" (Last Concert) to highlight the increasingly uncertain future of music venues. Instead of delivering live performances as part of a scheduled free virtual stream on February 27, each of around 130 Italian artists was filmed taking the stage at a different venue and then standing there in silence as a way of commemorating the one-year mark since the first Italian venues closed.

Organized by KeepOn Live, Arci, Assomusica and Live DMA, the "L'Ultimo Concerto?" campaign was announced in January when the venues shared images on social media of their year of foundation and the year 2021 with a question mark, suggesting that their closures due to the coronavirus pandemic could be permanent.

In September, LACUNA COIL took part in "Black Anima: Live From The Apocalypse", an exclusive streaming show featuring a full performance of the band's latest album, "Black Anima", for the very first time, including songs never performed live, plus special backstage/off-camera moments and more. The Italian heavy rockers played the concert from the Alcatraz Club in Milan. "Black Anima: Live From The Apocalypse" was hosted on A-Live.