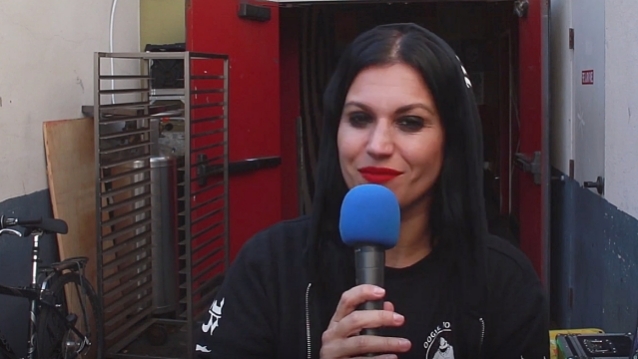 LACUNA COIL singer Cristina Scabbia spoke to Capital Chaos about the differences in the way music is treated in the streaming age compared to how it was when her band was formed out 25 years ago. She said: "Well, things definitely changed. Back when we started, of course, it was all about physical copies, it was all about waiting at the record store for the release of the album — religiously. You were waiting for that day. And now it's, like, everything is on streaming. There are leaks because some dicks — because some dicks — are putting albums and songs out without any respect for the artist, like it's a piece of nothing while every song, every record holds the art and the heart of the artist. There is a little bit less respect for music, which is kind of sad, for those who don't understand it."

Scabbia acknowledged that "you can't fight against" music being posted online illegally. "I just wish that there was more respect for music — that's all," she said. "It was pretty hard from the very beginning. I remember that a lot of people, when I told them I'm a musician, I'm a singer in a band, they were, like, 'Yeah, but what's your real job?' And I was, like, 'Yeah, this is my job. I actually tour the world. We live with our music.' But some people are still of the mentality that music and touring is just a hobby. And for most of us artists, it's not — it's our life. So, I wish that everyone would get that."

LACUNA COIL's latest album, "Black Anima", was released on October 11. Scabbia previously described the LP's musical direction as "heavier and darker" than the band's past efforts. "I don't think that LACUNA COIL has ever been so heavy," she told HardDrive Radio. "And it will be surprising a lot of people, because we experimented a lot of things differently — vocally and musically."