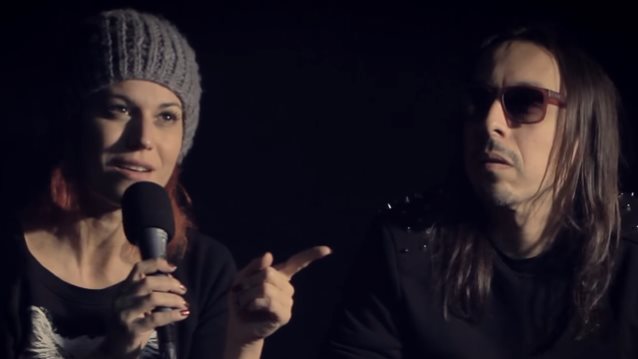 Metalshop TV conducted an interview with Cristina Scabbia and Andrea Ferro of Italian heavy rockers LACUNA COIL before their November 4 concert at Rock Cafe club in Prague, Czech Republic. You can now watch the chat below.

Asked if social media has helped LACUNA COIL reach a wider audience, Cristina said: "It probably did, just because it's easier to connect to the world. But we have been so lucky, because of the period when we started, to have a career. So we're not like a sensation band that came out last week with a single that everyone loves and wants and maybe next year we'll disappear. So we're lucky enough to have a strong basis of fans that always supported us from day one. And the social media has helped us out, of course, to spread the messages and maybe saying that there was a new record, or new video, or just to let regular people know what we do when we're in the backstage or what's happening in our lives or what's happening on the tour bus. So it definitely helps. It's not the secret of a success of a band [laughs]… but it definitely helps."

Added Andrea: "Especially nowadays, you don't really know. Everything has changed in the music business, so you don't know where people actually… how much the YouTube can work, how much the Facebook, the Instagram. So there's so many ways to get popular, but also so many ways to get lost. So the fact that there's all this attention from the social media, it's not necessarily always positive. Sometimes it just puts you in the middle of a thousand other things that every day change, and every day there's a new sensation about it. So it's very hard to use it if you don't have a strong starting place."

You can buy and/or stream "Naughty Christmas" on all digital platforms. The front cover and font were all created by bassist Marco "Maki" Coti-Zelati.

LACUNA COIL recently wrapped up a successful European tour, which was sold out in various cities, including London, Birmingham, Bristol, Southampton and Tilburg. The band is set to do another run of dates later this year.

LACUNA COIL's latest album, "Delirium", entered The Billboard 200 chart at position No. 33 with first-week sales of just over 13,000 units — nearly all from pure album sales. The set follows the No. 27-peaking "Broken Crown Halo", which also opened with around 13,000 copies back in 2014.