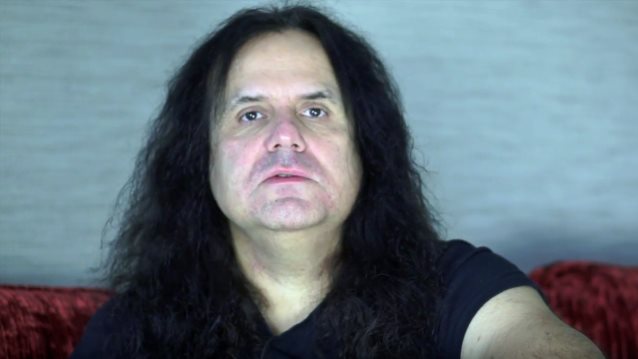 LoudTV.net recently conducted an interview with guitarist/vocalist Mille Petrozza of German thrash metal veterans KREATOR. You can now watch the chat below. A couple of excerpts follow (transcribed by BLABBERMOUTH.NET).

On having a fresh, positive attitude:

Mille: "Age is a state of mind, I would say. It's not about your physical decay; it's about your… You need to focus on what you really believe in, and if you do what you enjoy, you automatically stay young. And I think that's essential. Once you start thinking old, you become old, and that's when you are old. Because you're, like, 'Ah, you know what? I used to go to metal concerts, but nowadays I sit on the couch and zap through the TV channels. That is when you are old. But it's up to you. You can do anything up until you're eighty, ninety even, and live a very nice life without getting old."

Mille: "What happens in the videos is you see the birth of the KREATOR demon in the first video, 'Gods Of Violence', for the title track. In the second video, the demon, the KREATOR demon, goes… My original idea was to come up with a concept album where evil as a force of the human nature, a part of human nature, a characteristic part of the human existence, comes to life in this ancient orgy that you see in the first video. In the second video, it goes into the Middle Ages where a lot of… It's inspired by the movie 'The Witch' that I saw. So the second video is more like this witches sabbath. And the third one will be in a more modern setting. So you can see the same misery moving throughout time, in every era of the human history. And that was my idea — to link the Greek mythology to modern-day misery and terror."

KREATOR's new album, "Gods Of Violence" will be released on January 27 via Nuclear Blast Records. The cover artwork for the disc was created by renowned artist Jan Meininghaus, who also made the limited-edition artwork for KREATOR's last album, 2012's "Phantom Antichrist", and has lent his talents to bands like BOLT THROWER, ACCEPT and OVERKILL in the past.

The exclusive North American cover was created by renowned artist Marcelo Vasco, who has previously worked with SLAYER, MACHINE HEAD, SOULFLY and HATEBREED.