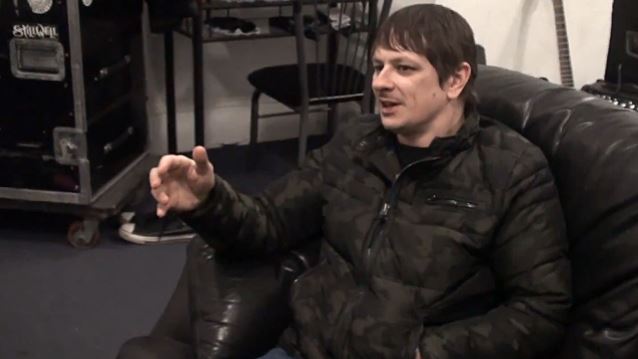 KORN drummer Ray Luzier says that the current generation of music fans doesn't understand that illegal downloading is akin to stealing, explaining that artists are not being properly compensated for "pour[ing their] heart and soul and [their] blood" into the albums which are being made freely available on the Internet.

Asked by Dalton Castle of the Albany radio station Q103 for his opinion on music streaming services like Spotify, Luzier said (see video below): "You know what?! It's one of those things where… I'm very… Here's the thing: My last band, ARMY OF ANYONE, that had STONE TEMPLE PILOTS guys and Richard [Patrick] from FILTER. This was the first time I saw someone steal music. They brought a CD-R up to me and said, 'Ray, would you sign this?' And they're waiting in the rain. I'm, like, 'Sure, Come here.' And [I went], 'Wait a minute. That's a blank CD.' [And he said], 'Oh, yeah. I ripped this off my friend.' And I'm, like, 'You stole…? My record is $9.99. You couldn't afford a 10-dollar bill? We just worked four and a half months.' I lost my shit. This was, like, '06. This was when it really started just taking place… I yelled at the guy for, like, ten minutes. It was so bad [my ARMY OF ANYONE bandmate] Robert DeLeo had to, like, pull me back, 'cause I was leaning into the guy. 'It's ten dollars. Who bought you those shoes?' You know… I was just out of my mind."

He continued: "My point is, you know, it's cool that sites [like Spotify] do this and it's instantaneous, but it's, like, what is the artist getting out of it? You know what I'm saying?!

"The thing is, with the newer generation, the kids don't really understand that it's taking or stealing. They're, like, 'What? I'm at your freakin' show.' And I'm, like, 'Yeah. But our record's ten bucks. Can't you just go out and…?' I'm one of those old dudes that still does that. I go out and come home from Best Buy with, like, four CDs. It's all about supporting the artist.

"It's, like, we work hard on our records, man. We don't sit in the studio and waste time. It's, like, you pour your heart and soul and your blood and all this stuff into this recording, and you put it out there, and there's sites like Spotify…

"I don't blame Taylor [Swift] for what she did, pulling her [music off Spotify]. Someone else did it recently, someone huge.

"But, whatever… We're not gonna stop it. It's technology; I get it. Whatever… I'm just saying, to the fans out there, if you really love your art and people you support, go buy the freakin' record. How hard is it?"

Luzier added: "It's been this way for years now. Especially in the rock world… Rock's never gonna die, but the rock sales have dropped off dramatically. But there's people flocking to [our] shows. We're not going anywhere. It's just the whole thing of…

"Someone's gotta do something — put a chip in there where you can't duplicate it. You know what I mean?!

"That's why people like… Look at U2. They had that big thing with Mac where they said, like… [Editor's note: Luzier is referring to U2's recent collaboration with Apple that resulted in the Irish group's new album, "Songs Of Innocence", being placed on every single iTunes account in the world for free regardless of whether it was wanted or not.] And, of course, there was money involved; they didn't give their record away. Don't anyone think that for a second. There's definitely giant dollars involved, from Apple.

"But my point it, even them. Look at [what] RADIOHEAD did years ago. 'We're gonna give you our record. If you wanna pay us for it, great.' Some people gave two dollars, some people gave ten. I think the average was, like, four dollars and eighty cents or something, at the end of the day.

"Whatever… My point is, major, huge artists are doing it, so it's, like… I don't know.

"I can bitch about it all I want, and [it's] really not gonna do anything."

The most popular subscription service, Spotify reportedly has around 40 million users, a fourth of whom pay for monthly plans while the rest get advertising along with their music.

Spotify pays artists and labels based on the number of streams they generate. The per-stream payout for a song streamed on the service is reportedly between 0.006 cents and 0.0084 cents.

KORN's 11th studio album, "The Paradigm Shift", sold 46,000 copies in the United States in its first week of release to land at position No. 8 on The Billboard 200 chart. The CD arrived in stores on October 8, 2013 via Prospect Park.

KORN's untitled album premiered with 123,000 copies back in August 2007 to enter the chart at No. 2. That number was slightly more than half of the 221,000 first-week tally achieved by its predecessor, "See You On The Other Side", which debuted at No. 3 back in December 2005.