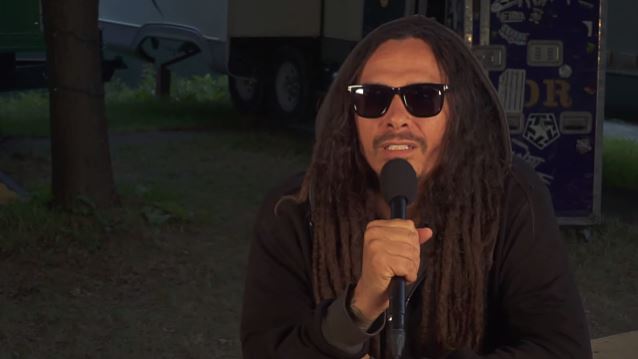 Louder Noise recently conducted an interview with KORN guitarist James "Munky" Shaffer. You can now watch the chat below. A couple of excerpts follow (transcribed by BLABBERMOUTH.NET).

On the progress of the songwriting sessions for KORN's follow-up to 2013's "The Paradigm Shift":

"We have a lot of demos done right now on the new stuff — not full songs, but they're rough ideas of mostly guitar riffs and some drums, all demoed. There's about, almost twenty ideas, which is good. It's a good start — good enough for us to get in the studio and start recording it and shaping it."

On KORN's remix of pop superstar Rihanna's "Bitch Better Have My Money" song:

"I was excited to do it, you know. I thought it would be cool, because there was just… I mean, she's a badass bitch — straight up — and to have these two worlds put together seems odd, but it oddly works. I think she's a metalhead, you know. She definitely has a metalhead edge about her, her lifestyle… I've not yet met her, but I'm sure I will soon, so I can really get her take on it. But it was fun… It was fun to do."