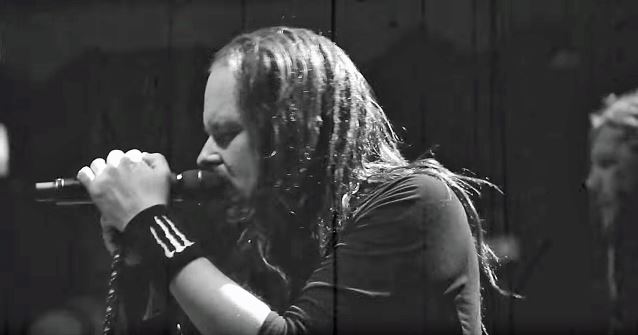 A three-minute video clip of the members of KORN performing and talking about their song "Daddy" from their self-titled debut album can be seen below.

KORN performed its self-titled debut album from front to back for the first time in the U.S. on March 14 at the Brooklyn Bowl in Las Vegas. The performance commemorated last year's 20th anniversary of the 1994 record's release, and featured just the second-ever live airing of "Daddy", which was last played in concert in 1995. The song was written about singer Jonathan Davis's experiences with being molested as a child.

"It was crazy, 'cause the song 'Daddy', we started playing that…. We hadn't played that since, like, 1994-1995, just 'cause Jonathan's really… it's really emotional for him," KORN guitarist Brian "Head" Welch told Metal Hammer. "But he said he still gets emotional doing it some nights, but he just… he says, 'I'll do it for the fans.' And, I mean, every night there's somebody crying in the front row, 'cause there's a lot of people that have been abused. It's really special to play that song. It's a dark song — it feels dark and everything — but it's kind of like therapy, I think, for people."

Davis told The Pulse Of Radio not long ago how he thinks KORN has changed in the more than two decades since they recorded their debut. "When we did the first KORN record, the self-titled, we were kids, man. We were just crazy-ass kids, getting drunk every day, just making music, living a dream and it was just insanity. And which I loved — I don't regret it one bit. But now I think where we're at 20 years later, I think it's more about making music and impacting people's lives and helping people."

Guitarist James "Munky" Shaffer told Loudwire how it felt to revisit the material from the band's first album, saying: "You can tell we were just kids and we were developing, uncovering and polishing a sound that we didn’t know was going to take off so much."