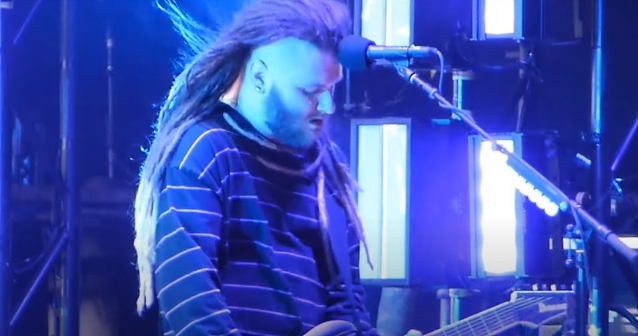 KORN has recruited J.R. Bareis to fill in for James "Munky" Shaffer while the guitarist is recovering from COVID-19.

Bareis, who is also in the band LOVE AND DEATH with KORN guitarist Brian "Head" Welch, previously stepped in for Shaffer in August 2019 when Munky was forced to miss several KORN shows due to the impending birth of his child.

Bareis played his first concert of 2021 with KORN last night (Thursday, September 9) at USANA Amphitheater in Salt Lake City, Utah. Fan-filmed video footage of the show can be seen below.

Last year, Welch told Ultimate Guitar about J.R.: "He's 25 years old. He started with me at 15 years old on the road. and I've known the kid since he was little. I'm kind of inspirational to him because I'm older, I've done so much, and he's kind of looked up to me. He's so talented that I want to bring out more from him."

Shaffer was second member of KORN in a month to test positive for COVID-19. In early August, singer Jonathan Davis came down with the disease, forcing the postponement of six dates and cancelation of two on KORN's current U.S. tour.

Last week, Davis said that he was still struggling with COVID-19 after-effects, nearly three weeks after it was announced that he tested positive for the novel coronavirus.

At some of KORN's recent shows, Davis has been taking a seat on a custom throne near the drum riser due to lingering effects of his bout with COVID-19. In video footage of KORN's August 27 concert in Tinley Park, Illinois — his first gig back after revealing his positive diagnosis — Davis could be seen walking slowly around the stage, coughing and appearing to take a minute to catch his breath. According to TMZ, Davis also took occasional hits from an oxygen tank set up near this throne.

Bareis is not the only session musician who is playing with KORN right now. Bassist Roberto "Ra" Díaz (SUICIDAL TENDENCIES) is filling in for Reginald "Fieldy" Arvizu on KORN's current tour after Fieldy announced in June that he would sit out the trek in order to "heal" after "falling back" on some of his "bad habits."