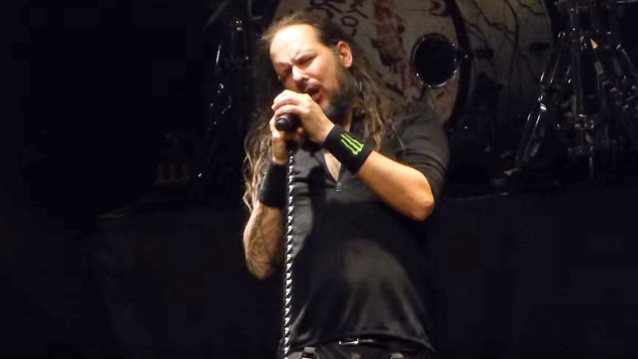 Quality fan-filmed video footage of KORN's October 8 performance at the House of Blues in Boston, Massachusetts can be seen below.

KORN launched a North American tour earlier in the month on which the band is performing its self-titled 1994 debut album in its entirety at every stop to commemorate the 20th anniversary of its release. The trek kicked off on October 1 in Chicago, winding down a month later on October 30 in Oakland.

A previously unexplored mixture of bass heavy musicianship sprinkled with electronic effects and hip-hop influences, KORN's debut is credited with launching the nu-metal movement of the 1990s, in the process influencing a host of other bands like COAL CHAMBER, SEPULTURA, MACHINE HEAD and LIMP BIZKIT.

Singer Jonathan Davis told The Pulse Of Radio not long ago how he thinks KORN has changed in the more than two decades since they recorded their debut. "When we did the first KORN record, the self-titled, we were kids, man. We were just crazy-ass kids, getting drunk every day, just making music, living a dream and it was just insanity. And which I loved — I don't regret it one bit. But now I think where we're at 20 years later, I think it's more about making music and impacting people's lives and helping people."