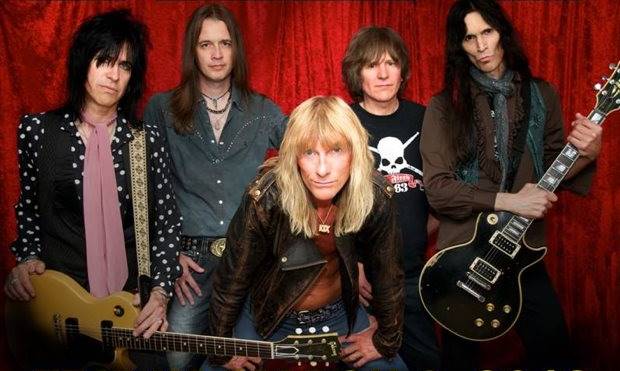 KIX's seventh album, "Rock Your Face Off", is available for streaming in its entirety using the SoundCloud widget below. The CD was released on August 5 via Loud & Proud Records.

For KIX, not recording any new music for two decades has been far too long. Fans have made it known for years that they want new music. And now, the time has finally come.

"Rock Your Face Off" is everything fans know and love KIX for: a raucous, roaring and real display of rock 'n' roll.

As guitarist Brian "Damage" Forsythe explains: "When we first played 'Love Me With Your Top Down' live just a few months ago, it went over like gangbusters with the fans. It's a catchy little tune with classic KIX flavor, a perfect choice for the first taste of the record."

What makes the new album even more exciting and anticipated is that it features most of the band's original lineup: Steve Whiteman (vocals), Brian "Damage" Forsythe (guitar), Ronnie "10/10" Younkins (guitar), Jimmy "Chocolate" Chalfant (drums), with the exception of Mark Schenker (bass).

With "Rock Your Face Off", KIX stirs up their truest statement to date in 2014. "It's still hot women, fast cars, and great moments," concludes Whiteman. "I want everybody to end up on their feet, whether they're working out or stuck in rush hour traffic. This is a release, something to lift your spirits when you need it. You can party to this one."

KIX gracefully eased back into the public consciousness in 2008. After sold-out hometown gigs, the quintet hit the stage at Rocklahoma in front of over 20,000 people, venturing out of the Mid-Atlantic for the first time in 13 years. The band was hailed by many music web sites and attendees as "Best Performance" at the festival, where they played alongside SAMMY HAGAR, ALICE COOPER, TESLA, QUEENSRŸCHE, RATT, and more. After capturing their fiery reunion on 2012's "Live In Baltimore" CD and DVD, the band agreed to enter the studio once again.

"In many ways, this is for the KIX diehards as much as it is for us," guitarist Brian Forsythe explains. "When we started doing this again, tons of fans came out of the woodwork. They'd show up with their kids, and it was just incredible to see. We had to deliver for them."

In order to deliver, the band enlisted the talents of producer Taylor Rhodes (AEROSMITH, OZZY OSBOURNE), with whom they had last collaborated on 1991's "Hot Wire". Also, for the first time in the group's history, each member contributed to the writing process, fostering an extremely creative and free environment in the studio. A new dawn commenced as they simultaneously harnessed their classic spirit.

"It was more free-flowing because everybody got to write and come up with ideas," says singer Steve Whiteman. "We encouraged this new freedom within the creative process."

"Rock Your Face Off" track listing: