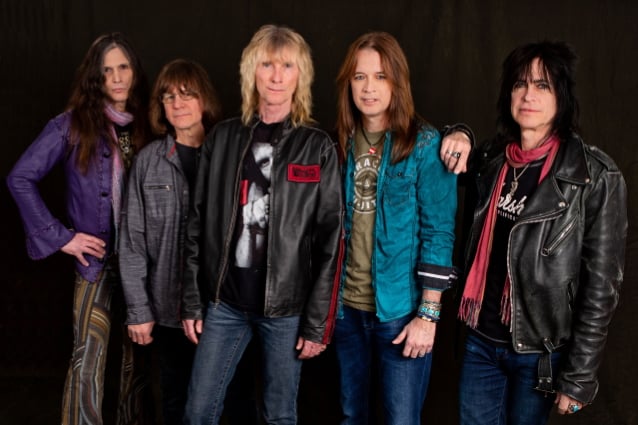 KIX drummer Jimmy "Chocolate" Chalfant suffered a heart attack at his home on the evening of Wednesday, September 29 and was rushed to the hospital. He had immediate surgery to insert two stents in his heart then another surgery the next day for another stent. Good news is he is feeling way better, has been discharged from the hospital and is doing well resting at home. However, he may have a bit of a road in front of him for cardiac rehab to allow him to make a safe and full recovery.

KIX remains committed to playing all shows that are currently booked. The band states: "We want to stress that NO shows are being cancelled or postponed. We are committed to fulfilling ALL of our contractual obligations. With Jimmy's blessing, we would like to announce that Will Hunt (EVANESCENCE, BLACK LABEL SOCIETY, SLAUGHTER) will be taking over drum duties for the upcoming Monsters On The Mountain in Pigeon Forge TN on October 15th. Will is excited to perform with KIX and we are lucky to have such a seasoned veteran able to step in last minute. For all other shows post Monsters On The Mountain, we would like to announce that our good friend John Allen (STONE HORSES, CHILD'S PLAY, SR-71) will be sitting in on drums until Jimmy is able to play again.

"Jimmy asks that the fans throw their full support behind our temporary drummers. He is fully dedicated to improving his health and he intends to be back on his throne in his rightful place as soon as physically possible."

KIX was founded in 1977 and released its first, self-titled album on Atlantic Records nearly 40 years ago. Their breakthrough came with 1988's "Blow My Fuse", which sold nearly a million copies, thanks to "Don't Close Your Eyes". The band continued to ride the hard-rock wave until 1995, when KIX took a hiatus. Nearly 10 years later, KIX reunited and started touring regionally. A 2008 performance at the Rocklahoma festival led to more gigs and the release of a live DVD/CD called "Live In Baltimore" in 2012.

KIX guitarist Ronnie Younkins is currently unable to tour with the band because he has been placed under house arrest after repeatedly getting in trouble with the police. He is being temporarily replaced by Bob Paré, an accomplished musician who studied at the Music Institute in Los Angeles and taught music theory and guitar at several institutions, including Western Maryland College and Maryland Institute of Music.

NEW YORK, NY (October 6, 2021) KIX drummer Jimmy “Chocolate” suffered a heart attack at his home on the evening of...